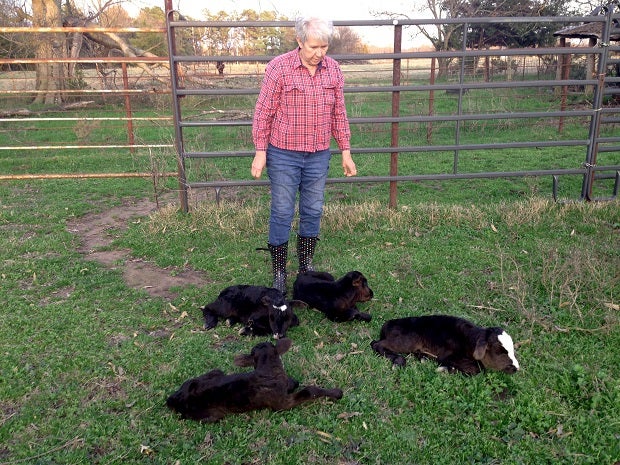 This photo provided by Jimmy Barling shows his wife, Dora Rumsey-Barling among four newborn calves on March 16, 2015, near DelKalb, Texas. A momma cow has apparently defied great odds and given birth to four calves. Barling said Monday, March 23, 2015, that DNA tests will be done to satisfy those who question the veracity of the calves births from one mother, the odds of which were 1 in 11 million. AP

LUBBOCK, Texas, United States — A cow in Texas has apparently defied great odds and given birth to four calves that have been named Eeny, Meeny, Miny and Moo.

Jimmy Barling said Monday that DNA tests will be done on tissue samples from the three bull calves and the one heifer calf to satisfy those who may question the births from one mother.

“We knew she was pregnant, but we didn’t know she was going to do this,” the 76-year-old Barling said. “This was a shock. This blew our minds.”

Barling’s wife, Dora Rumsey-Barling, owns the couple’s 20 or so cattle outside of DeKalb, near the Arkansas and Oklahoma borders. Rumsey-Barling’s granddaughter named the four black calves Eeny, Meeny, Miny and Moo, Barling said.

Local veterinarian Mike Baird called the March 16 births “extremely rare.” He said the odds of four live births from one cow are 1 in 11.2 million.

“In the interest of science and the animal world, it’s one of those things that need to be verified beyond a shadow of a doubt,” he said.

The couple watched the birth of the fourth calf after going to check on her when they saw buzzards circling above a field.

Because the mother cow is unable to nurse all four calves, the couple are relying on neighbors to help. Moo has stayed with her mother, while Eeny, Meeny and Miny are with two different caretakers. Meeny is the smallest of the calves, weighing in at about 25 pounds (11.3 kilograms).

A typical healthy birth weight for a calf is 75 pounds (34 kilograms). Standing has also been difficult for some of the quadruplets.