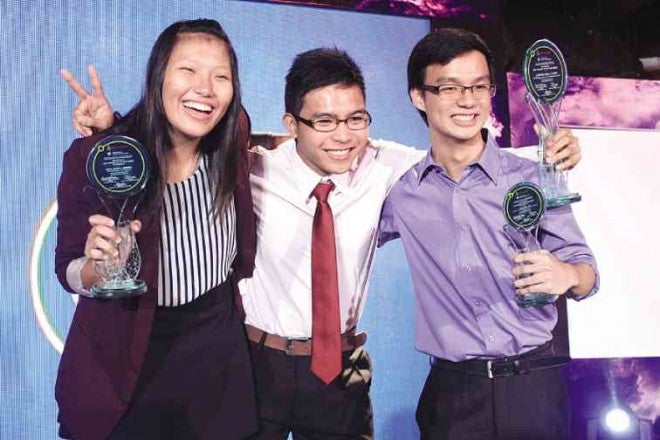 Laboratory work may not be as glamorous or as rewarding as a career in finance, but basic scientific research is essential to national development.

Some banks or insurance companies award talent in picking stocks or building portfolios, but for more than 25 years now the Bank of the Philippine Islands, with the Department of Science and Technology, has recognized remarkable work in Science by college students.

Eight college seniors and their scientific projects went on to the finals. The three most outstanding ones were recognized recently at the Mind Museum in Taguig City.

The project was declared the grand winner but Capirig recommends more studies to establish the bacteriaÆs antifungal properties.

Oil and water do not mix well, but when accidents happen, how do we separate them? Tanker ship accidents and the spills they cause have extensively damaged marine life and the ecosystem.

Raiza Elmira S. Imperial (BS Chemistry) of the University of the Philippines (UP) Diliman was first runner-up for developing a clever fabrication of a special coating of polythiophene on a steel mesh. The coating is superhydrophobic (hates water) and superoleophilic (loves oil).

To test the coated mesh, Imperial used various water samples, solvents and petroleum products. Results showed that water of various acidity did not pass through the mesh, while gasoline, kerosene and crude oil easily made it through.

Ordinary computers might have reached their processing and speed limits   but the next-generation quantum computers should be a lot faster at data optimization, materials simulation and other well-defined tasks.

Going back to bacteria that can also be useful, Ma. Celina L. Guillermo (BS Life Sciences) of Ateneo de Manila University (ADMU) focused on a unique specimen, the magnetotactic bacteria, so called because they produce extremely small (nano-sized) magnetic particles that enable cells to move according to the earth’s geomagnetic field.

Magnetotactic bacteria were virtually unknown but through genetic sequencing of a particular sediment in Nagsasa, Zambales province, Guillermo studied its properties. The strain, known as ADMU-10, is so far only the third strain belonging to the Gammaproteobacteria class.

Further studies of this microorganism may hopefully lead to indigenous and inexpensive nanoparticles that can be used to detect cancer cells and other diseases.

For diseases to be successfully treated, targeted drugs have to be properly absorbed by the body. Polycaprolactone (PCL) is touted as an ideal material for drug delivery, tissue engineering and cell cultures, but it is not easily compatible with water.

The study was cautiously optimistic. Glycerol-modified PCL became partially soluble in methanol. It also had more affinity with water than ordinary PCL.

Environmentalists dream of renewable energy sources, but they are not always stable. So energy from sunlight or wind has to be stored in batteries and supercapacitors.

Studies around the world are underway to create storage materials that can be used with wearable and portable electronics.

Ina Andreia O. Mauleon (BS Chemistry) of the University of Santo Tomas has come up with a native electrode material: The buri fabric (raffia).

To make raffia conductive, Mauleon brushed it with regular carbon black and self-dispersible carbon black. She discovered that the latter had better conductivity, higher surface area and higher specific capacitance.

How can rescue operations communicate with those in disaster-stricken areas? Base stations connect with existing telecommunications systems and televisionÆs white space is used as frequency because it has a lot of unused spectra.

But transmitted signals have to be amplified first and the messages filtered.

Steven Matthew C. Cheng (BS Electronics and Communications Engineering) of UP Diliman worked on a UHF bidirectional amplifier that operated within the UHF TV band (450 to 900 megahertz).

Tests with plug-and-play UHF radios and antennas showed that automatic switching between transmit and receive modes was achieved.

The global positioning system works well outdoors. Indoors there is simultaneous localization and mapping (SLAM). With a smartphone, a person can find his/her way by keeping track of his/her position and mapping the environment.

One way SLAM works is through inertial navigation systems that estimate motion based on the number of steps taken.

But the systems are prone to sensor errors, so cameras are needed to correct them. The solution, however, leads to another problem. The cameras may manage sensor problems successfully, but they have poor motion estimation.

Calculations showed interesting results: Devices can be calibrated to ensure optimum entanglement and the study can serve as a bridge between quantum information theory and statistical mechanics.