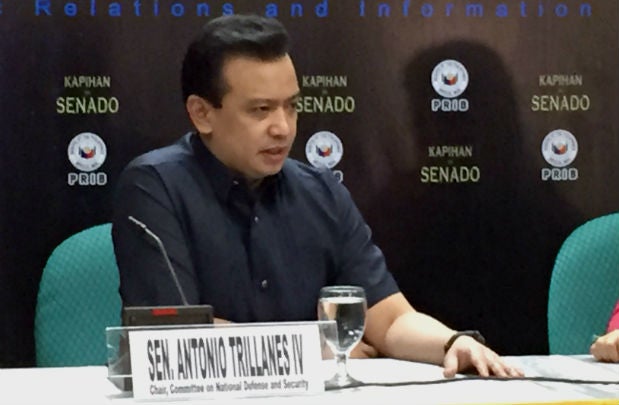 MANILA, Philippines—While their 44 colleagues were being slaughtered by Moro rebels in Mamasapano, some 300 members of the Special Action Force (SAF) a few hundred meters away did nothing to save them, citing heavy artillery fire for their refusal to help, Sen. Antonio Trillanes IV told reporters at the Magdalo headquarters in Quezon City on Friday.

Trillanes said the group who were to serve as blocking force and support for the SAF men during their Jan. 25 mission to hunt down international terrorist Zulkifli bin Hir alias Marwan, “just lay on the ground, sent text messages, or lay on their stomachs even though they could hear their colleagues calling for help (through the radios).”

The senator said there were also indications that the police commandos wanted to keep the Mamasapano operation to themselves and had no plans of coordinating with the military, because the night before the mission was launched, intelligence officers from the Philippine National Police (PNP) invited two unit commanders from the Army’s 6th Infantry Division on a night out.

This, Trillanes said, was meant to keep tabs on the military and ensure that they had no operation in the area the next day. “They wanted to keep [the operation] to themselves. They had no plans of coordinating. They could have coordinated then,” he added.

“These are crucial (details) since they would show that the main factor for the death of the 44 SAF members, who still deserve to be recognized as heroes, was their abandonment by their own colleagues,” the senator said.

“We’re looking for someone to blame. We went to the Army, we reached Malacañang, but we haven’t asked SAF as a unit if they went to help their colleagues,” Trillanes, a known administration ally, said, adding that PNP chief Leonardo Espina should investigate these SAF troopers and determine why they failed to provide reinforcements for their beleaguered colleagues.

The Army personnel asked the SAF troopers to provide reinforcements for their colleagues, but the commandos refused, Trillanes said. One SAF personnel told the Army they did not want to go to the encounter site because the firefight was too heavy and they were not familiar with the terrain, he added.

Trillanes said he felt free to disclose these details publicly because he got them from Army personnel and not from the Senate executive sessions on the Mamasapano incident which also discussed this information but did not include it in its report, presumably because the report was crafted to conform to public expectations.

Had the SAF troopers provided reinforcement, they could have helped save their colleagues from the 55th Special Action Company (SAC) because the information was that the armed men they had encountered numbered only 100 to 150, the senator said.

Trillanes said that 120 troopers from the 45th and 42nd SAF companies, who were among the 300, were supposed to be close to the 55th SAC but did not get to their positions because they failed to depart from their drop off point on time.

“If they had departed on time and were able to get to their objective, they (could) have been with the 55th SAC when the firefight happened,” he said.

“At face value, there was a breakdown in leadership, a breakdown in discipline,” Trillanes said, adding that SAF director Getulio Napeñas Jr. had attested to ordering his men to provide reinforcements, but they had cited the heavy volume of fire for failing to do so.

But the senator said his Army source had told him that from their position, which was around 800 to 900 meters away, there was no gunfight. The firefight was in the area of the 55th SAC, he said, adding that despite their claims of heavy fire, none of the 300 men bore any injury.

Trillanes: SAF morale low but no ouster plot vs Aquino