Cerbo: Bypassing of PNP chain of command ‘not abnormal occurrence’ 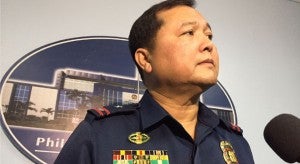 MANILA, Philippines–Bypassing the Philippine National Police chain of command is not an “abnormal occurrence,” the spokesperson of the 150,000-strong organization said Friday.

Still in defense of President Benigno Aquino III’s nonliability in “violating” the PNP chain of command, Chief Superintendent Generoso Cerbo Jr. maintained that all police commanders, as well as the country’s commander in chief, have the right to coordinate directly with anyone of their subordinates.

Citing an example, Cerbo likened Aquino’s authority to that of a police regional director.

In the PNP organizational structure, under the regional director is a provincial director, whose subordinate is the city, town, or municipality police chief.

“All of us PNP commanders know that. We always have this prerogative to talk directly with our subordinates, bypassing intermediary supervisions,” he said.

“That’s not abnormal. That really happens.”

This has triggered public outrage while Aquino has been under fire for mishandling the operation.

He stressed that Aquino’s failure to coordinate with Espina is not a violation.

“It’s simply talking directly to your subordinate in that context,” he said.