Tambako tells cops: I am a good man 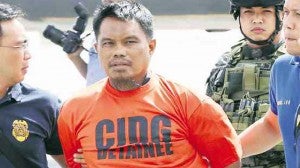 COTABATO CITY,Philippines – “I am a good man.”

These were the first four words of Mohammad Ali Tambako, leader of the rebel group, United Justice for Islamic Movement, when government agents arrested him in General Santos City on Sunday night, a ranking official of the Criminal Investigation and Detection Group in Sultan Kudarat on Wednesday said.

But when arrested, Tambako allegedly told the police and military agents the he was an Islamic preacher.

“’I deny the charges against me, I am an Islamic preacher teaching good values to my students,’” Chief Inspector Elmer Guevarra, CIDG Team Leader of Sultan Kudarat province and among those who collared Tambako, quoted the rebel leader as saying.

Guevarra told reporters that the CIDG had been hot on the trail of Tambako after it received information that he was in Soledad Subdivision, Barangay Calumpang in General Santos City.

Col. Renato Padua, chief of the Joint Task Force GenSan, said residents of Soledad alerted police and military authorities about the presence of “new faces” and suspicious men in one of the housing units.

He said a coordination meeting was quickly held Sunday afternoon along with all operating units to serve the warrant of arrest for Tambako after his presence was confirmed. (The warrant of arrest was for the 2013 beheading of a farmer and the hostage-taking of three teachers.)

But Tambako sensed lawmen had their eyes on him so he and his four men quietly left Sunday night on board a tricycle en route to Gen. Santos City seaport.

Guerrra said Tambako did not resist arrest after seeing that police and soldiers had surrounded him and his followers. But he kept repeating he was a ‘good man’ and that he was an ‘Ustadz’ while lawmen frisked him and his escorts.

Tambako has been silent since then, and even after he was brought to CIDG office for detention procedures.

Padua, citing intelligence information, said Tambako’s group had plotted to set off at least three improvised bombs in General Santos to distract the military from its operations in Maguindanao.

Arrest of Tambako has weakened BIFF—military