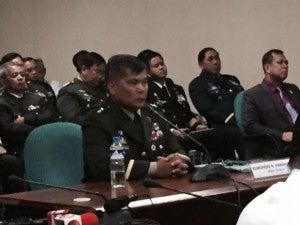 MANILA, Philippines — Major General Edmundo Pangilinan, the commander of the Army’s 6th Infantry Division (ID), failed to get on Wednesday the confirmation of the powerful Commission on Appointments after Senate Majority Leader Alan Peter Cayetano moved to defer actions on his appointment in May.

“I’m satisfied with many of your answers. There are still gaps and unfortunately hindi ikaw ang sasagot nun ang (you’re not the one who will answer that, it’s the) COS, maaring ang Pangulo (it could be the President), si General Napeñas, etc.,” Cayetano said after he grilled Pangilinan over his role in the January 25 Mamasapano operation during the latter’s confirmation hearing at the CA’s committee on national defense.

“But my problem is this, if we confirm him (Pangilinan) today , and in the next few weeks the investigation shows something negative, it will reflect on this committee,” said the senator.

“Having said that, hindi pa naman tayo (we’re not yet about to) magsi-sine die, I will have no objections, with the permission of my colleagues if they permit me to move, for the deferment. But I have no objections if we will take him up on the first week or second week of May,” Cayetano said.

Besides, the senator pointed out that the deferment would not affect the retirement of Pangilinan, who will turn 56 in November 2016.

Asked to respond to Cayetano’s motion, Pangilinan said: “Definitely, personally I’m affected and definitely also my troops but but I always submit myself to the pleasure of the Commission having the authority over my person, regarding my confirmation, your honors.”

Cayetano made the motion after he grilled the commander for his decision not to fire artillery support despite Napeñas’ repeated request while his troops were under fire by armed men in Mamasapano.

The senator also questioned Pangilinan over the alleged involvement of the United States in the Mamasapano operation.

A Senate draft report on the Mamasapano incident mentioned that an American ordered Pangilinan to fire the artillery during that operation.

“However, Pangilinan refused and told him ‘Do not dictate to me what to do. I am the commander here!’” the draft report quoted the military official as saying.

Except for Pangilinan, the committee recommended for plenary actions the appointments of 37 military officers.