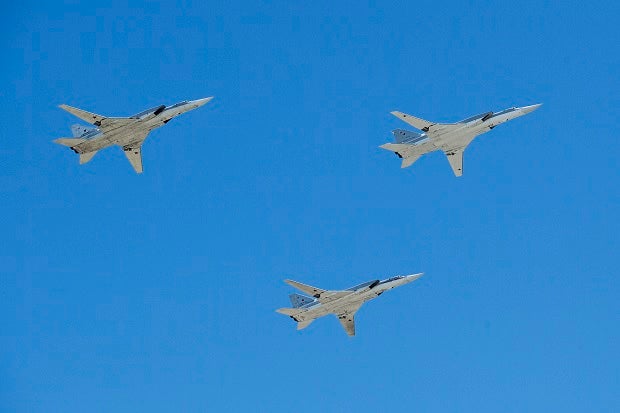 In this Friday, May 9, 2014 file photo Russian bombers Tu-22M3 fly in formation during a Victory Day Parade, which commemorates the 1945 defeat of Nazi Germany in Moscow, Russia. Russia plans to station state-of-the art missiles to its westernmost Baltic exclave and deploy nuclear-capable bombers to Crimea as part of massive war games intended to showcase the nation’s resurgent military power amid bitter tensions with the West over Ukraine. AP

RIGA, Latvia – NATO allies are scrambling to protect vulnerable Baltic partners from the threat of hybrid warfare, a Russian tactic that officials and experts say is based on deception rather than formal declaration of war.

They endured decades of Soviet occupation after the Red Army rolled in during World War II. While a full-scale invasion is improbable now, hybrid meddling and destabilization tactics designed to test NATO’s commitment to collective defense are not.

Putin’s brand of hybrid warfare also relies on “misinformation, bribery, economic pressure”, which are designed to “undermine the nation”, according to Latvian Defence Minister Raimonds Vejonis.

Lithuanian President Dalia Grybauskaite did not mince her words when she said: “The first stage of confrontation is taking place — I mean informational war, propaganda and cyber attacks. So we are already under attack.”

According to James Sherr of Britain’s Chatham House think-tank, hybrid warfare is “designed to cripple a state before that state even realizes the conflict has begun.

“It’s a model of warfare designed to slip under NATO’s threshold of perception and reaction.”

NATO is “looking at how we prepare for, deter, and –- if required –- defend against hybrid threats,” the former US ambassador to Moscow said recently at a security conference in the Latvian capital Riga.

Not to be caught off guard amid an increased Russian military presence in the Baltic, alliance members have mounted a series of troop rotations into the region.

The United States also deployed a cargo ship full of heavy armor there this month, including helicopters and tanks for exercises dubbed Atlantic Resolve.

NATO will boost defenses on Europe’s eastern flank with a spearhead force of 5,000 troops and command centers in six formerly communist members of the alliance: the Baltic states and Bulgaria, Poland and Romania.

Lithuania revived its pre-WWII Riflemen’s Union to help deter the threat of both conventional and hybrid warfare.

The citizens’ militia boasts over 8,000 members in the nation of three million people, a number almost on par with its 8,000 military personnel and 4,500 reservists.

With roughly a quarter of the populations of Estonia and Latvia being ethnic Russian, some argue that Moscow’s huge TV, radio and Internet presence is part of a hybrid battle for Baltic hearts and minds.

Putin justified his Crimea takeover by insisting that Moscow was coming to the defense of ethnic Russians in the territory, sparking concern here that Russia could deploy a similar policy.

According to Riga journalist Olga Dragileva, a hybrid media war aimed at sowing “dissatisfaction and illusions” among ethnic-Russian Latvians is in full swing in the eurozone member, which is still recovering from a crippling 2008-9 recession sparked by the global financial crisis.

It amounts to “the weaponization of social media”, according to Janis Karklins, director of NATO’s Strategic Communications Centre of Excellence.

Based in Riga, the center works to analyze the official Russian political narrative and suggest responses.

Karklins warns the solution does not lie in creating counter-propaganda: “The old recipes are not effective any longer.”

He proposes instead “to develop skills of media information literacy and critical thinking in our education system to make it harder for adversaries to disorient the population.”

EU leaders are expected to agree at a summit this week to set up a special media unit to counter what the bloc sees as a skilful Russian propaganda campaign during the Ukraine crisis.

Many here believe neighboring Estonia had a foretaste of hybrid war in 2007 when the nation of 1.3 million suffered a blistering cyber attack against official state and bank websites.

The assault was widely blamed on Russian hackers, although the Kremlin denied involvement.

As in hybrid warfare, aggressors in cyber warfare are often hard to identify and hence may not fear immediate and targeted retaliation — a key plank of conventional warfare.

Moscow insists Kohver was engaged in a clandestine operation in Russia and has charged him with espionage.

To counter similar murky scenarios, Vershbow says the alliance must develop hybrid responses able to “deploy the right forces to the right place at the right time”.