DepEd chief to Bilibid grads: We’re not that different 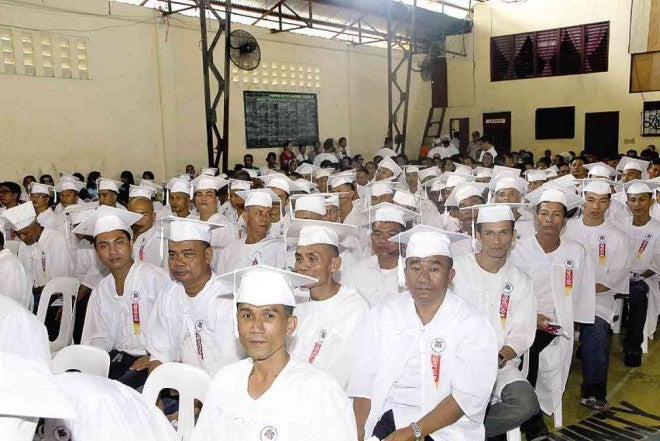 BATCH 2015 A total of 542 convicts finished 10-month courses under the Department of Education’s Alternative Learning System, some of them shown here at their March 12 graduation program inside New Bilibid Prison. DEPED PHOTO

“In reality, what really makes us different from you? We all made mistakes and not just once. The difference is that you were sent to prison while we were not caught. We cannot stand here and say ‘you are bad, we are good’… We are all the same: The lessons in life you now know are the same lessons we should also learn.’’

It was a no ordinary graduation program, hence Education Secretary Armin Luistro veered off the usual remarks as the commencement speaker before some 500 inmates of New Bilibid Prison (NBP) who had hurdled special courses offered by the Department of Education (DepEd).

In ceremonies held on Thursday at the NBP in Muntinlupa City, Luistro formally closed another year of the DepEd’s Alternative Learning System (ALS) as applied to the national penitentiary, where convicts are given a chance to overcome illiteracy or acquire livelihood skills even behind bars.

One of the top graduates was 35-year-old Bajunaid Kasim, who said that by studying for at least four hours a day he was able take his mind off things that would have otherwise gotten him into trouble inside the maximum security compound.

Wearing a white toga and a mortarboard hat donated to the NBP by a private sponsor, Kasim led the oath-taking ceremony for the batch of 542 graduates who finished 10-month ALS courses while serving sentences for various crimes.

Kasim was the valedictorian in the Accreditation and Equivalency (A&E) program for secondary education, which had 81 enrollees this year. The A&E program for elementary education had 31 graduates, while the Basic Literacy Program produced 45. The rest of the graduates took up vocational courses.

Looking forward to being pardoned or granted parole, Kasim said he took his ALS course seriously to prepare for life outside Bilibid. Balancing his schedule like an ordinary working student, he worked in the morning as an errand boy in a bakery inside NBP and studied in the afternoon. By earning P800 a month, he believed he became less of a burden to his five siblings, four of whom are based in Mindanao.

A native of Maguindanao province, Kasim moved to Manila in 2003 in the hope of supporting his younger siblings after their parents died. Three years later, however, he was arrested “for illegal drugs”—he declined to talk about his case in detail—and was later sentenced to life imprisonment.

“My youngest sister, who is now in Saudi Arabia, is the only one who knew I’d be graduating today,” he said. She has sent her congratulations and told him “to continue what I’m doing so that I’ll have a clean record by the time I’m (assessed for) parole.”

Once free, Kasim said, he would like to return to his home province as an ALS teacher especially for out-of-school youths displaced by the armed conflict in the south.

‘Inmate-teachers’ get P250 a month

In an interview, Luistro explained that the NBP’s education program is currently funded by the Bureau of Corrections (BuCor). “However, DepEd is in discussion with BuCor on how their existing education programs can be strengthened and we might establish this as a separate school with its own budget allocation,” he said.

Luistro estimated that a program benefiting more than a thousand students would need an allocation of roughly P20 million. “[A] partnership with NBP [can bring the] actual cost down as the bulk of the teachers would be fellow inmates who will get nonmonetary benefits for their services.”

According to ALS officer in charge Eduardo Cabuhat, 69 inmates are now serving as teachers for their fellow prisoners. These “inmate-teachers” are college graduates who applied and were interviewed for the position. Once accepted, they were made to attend a seminar on ALS and were given an allowance of P250 a month.

“It is important to educate the inmates since they were brought to the NBP to be reformed, so that when they go out they can be productive members of society and won’t return to their old ways,” Cabuhat said.

‘Dreams are never lost in Bilibid’

In a speech delivered in Filipino, Luistro said Thursday’s graduation rites allowed him see up close that “dreams and hopes are never lost inside Bilibid,” that aspirations can still “shine even in the darkest moments of our lives.”

Luistro, a Lasallian Brother and former president of De La Salle University, said the graduates may be considered “teachers” in their own right for showing that it is always possible for a person to get back on his feet after a fall.

“I know a lot of people (not in jail) who know how to recognize and celebrate success but cannot accept failure,” he said.

“We who are outside have also committed mistakes which we try to forget,” he added. “Perhaps, if we are made to stand face to face, you will come out as genuine while we will look pretentious. Thanks for making me realize this; it is something that should be imparted to our youth and taught in all schools.”

Luistro ended his remarks by making an “apology on behalf of a Filipino society and a world that didn’t give you enough. Many of you were led to this path because of the failure of families, of society and of government, which are all supposed to look after you. You did not finish school, not because you were dumb or you didn’t like studying, but because we (in the education sector) did not fully perform our duty to be your guide.’’

The ALS, he said, “is our way to somehow make up for those shortcomings, for what was kept from you when you were still free men.”