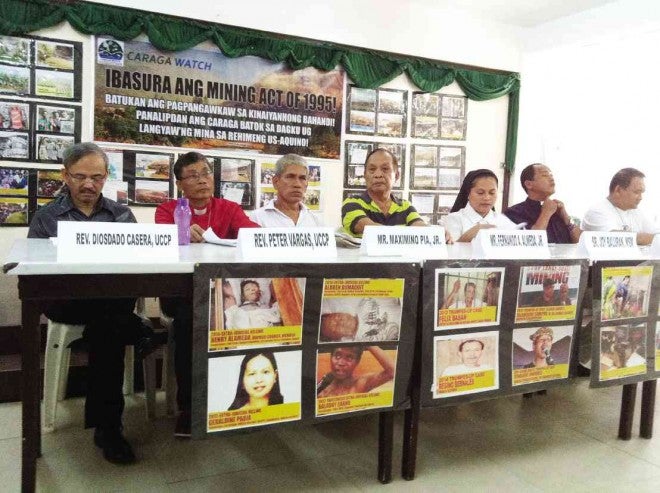 SURIGAO CITY—Government agencies are now in a quandary on which among them should pursue the case against three controversial mining firms in Tubay, Agusan del Norte, which had operated as small-scale mines but which the Supreme Court found to be liable of over-extraction.

An antimining group, Caraga Watch, had accused the ruling Liberal Party (LP) of protecting the mining firms because these are owned by supporters and a leader of the party.

It meant SRMI and its subsidiaries illegally hauled and sold shiploads of nickel ore in quantities more than what is allowed by law.

The case stemmed from a 2006 cease and desist order issued by the Department of Environment and Natural Resources (DENR) against the three firms, then operating as small-scale mines, after finding that they had already extracted over 177,000 metric tons (MT) of ore in less than a year of operation. The law allows small-scale miners only 50 MT per year.

Environmental advocates and religious groups have called on government agencies to initiate plunder charges against the controversial mining firms, owned by the Guttierez family and Caloocan City Representative Edgar Erice, an LP stalwart.

Erice, listed as chair and president of SRMI when the over-extraction case was filed, was quoted in media reports as saying he had already divested his share in the company.

Leaders of Caraga Watch noted the recent high court ruling has cleared the way for SRMI’s owners to be held liable for plunder.

Government agencies, however, are either pointing fingers or claiming they are unaware of the high court decision.

The Inquirer learned that as early as 2007, a plunder complaint in connection with the over-extraction case had already been filed against Erice and SRMI owners. Butuan City-based businessman Rodney Basiana filed the complaint at the Department of Justice, which forwarded the case to the Ombudsman.

SRMI’s over-extraction case also dragged the name of then Agusan del Norte Gov. Erlpe John Amante, who in 2011 was ordered arrested by the Sandiganbayan in connection with ore transport permits he issued to SRMI.

Amante, who evaded arrest by posting P90,000 in bail, was accused of allowing SRMI to transport nickel ore from August 2006 to April 2007 beyond the allowable limit.

Adela Antigua, provincial environment and natural resources officer of Agusan del Norte, said she wasn’t “sure” whether it was the capitol’s job to pursue the SRMI case.

“We have no discussions about that at the PMRB (Provincial Mine Regulatory Board),” Antigue told Inquirer, referring to the provincial body that oversees small-scale mines.

National agencies, meanwhile, pointed their fingers back at the local government unit.

“That’s not within our domain anymore, as we only supervise large-scale mines,” said engineer Daniel Bilderol, officer-in-charge of Mines and Geosciences Bureau in Caraga, when Inquirer asked about the SRMI case.

He said SRMI and its two sister companies were still small-scale miners when the case was filed in 2006, “and therefore under the supervision of the provincial government.”

This was echoed by both Eric Gallego, spokesperson of DENR-Caraga, and Reynaldo Degamo, of the Environmental Management Bureau-Caraga (EMB-Caraga).

Degamo, the permit section head of EMB-Caraga, recalled that SRMI, San R and Galeo had paid over P7 million in fines for various environmental violations in 2007.

Nevertheless, Degamo said SRMI was able to convert itself into a large-scale operator after obtaining from EMB an Environmental Clearance Certificate (ECC) the following year.

Aside from violating extraction limits, DENR had found that San R and Galeo’s ECC were granted without legal basis.

This should have been enough not to grant SRMI, the mother company, an ECC when it applied for a Mineral Permit Sharing Agreement (MPSA) in 2008, according to lawyer Jan Perry Eugenio of Balaod Mindanaw, a legal advocacy group.

“If the ECCs were null and void ab initio [in the beginning] when they were still small-scale miners, then why grant another ECC for large-scale operation?” said Eugenio, whose group had initially provided legal aid to the affected community when SRMI sealed off a public road for its own use.

Degamo of EMB countered that ECC applications for small and large-scale mines are treated separately and a company’s violations are not necessarily taken into account when it applies for an MPSA.

Nevertheless, Eugenio described the high court decision as a “vindication” for residents who opposed SRMI’s operations from the start.

Rev. Peter Vargas, of Caraga Watch, said the group was willing to intervene in the case as interested parties “if no one dares to confront this powerful mining company.”

Vargas said SRMI’s case is proof that laws on mining are being used as a “tool” by the ruling LP to protect its benefactors in the mining industry.

Vargas said government agencies, like DENR, should pursue the case. Inaction, he said, would be taken as a deliberate scheme to cover up.

“Nothing has been done. Is it because their owners are closely affiliated with the Liberal Party?” Vargas said.