More fun in Camiguin, minus ‘Mindanao’ 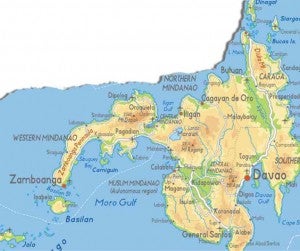 On its self-drawn tourism map, Camiguin is somewhere “south of the Visayas and north of Cagayan de Oro.”

And it took the deletion of just one word—“Mindanao”—from promotional advertising materials in the United States and the United Kingdom for visitors to come and enjoy the attractions of the island-province to reap the benefits of tourism.

“We wanted to attract investors, yes, but when we are asked where Camiguin is, they would have doubts when we say it is in Mindanao,” Romualdo said.

Mango-shaped Camiguin, with a population of some 80,000, is roughly 240 square kilometers in land area—the second smallest island-province of the country, with 23 kilometers at its longest and over 14 km at its widest.

Geographically, the fifth-class province (annual income: P90 million-P180 million) is off the northern coast of Mindanao and near the Visayas. Politically, it belongs to the Northern Mindanao region and was once part of Misamis Oriental province, whose capital is Cagayan de Oro City.

“We, just like any other province in Mindanao, are affected by the bad publicity about our Mindanao,” Romualdo said.

For many decades, Mindanao has been reeling from widespread poverty, kidnappings and other crimes, and armed violence brought about by Moro and communist insurgencies.

Romualdo said that when Camiguin dropped the word “Mindanao” from its publicity ads, the number of tourists visiting the island rose by as many as 380,000 per year.

Among its popular attractions are the sandbar called White Island, Katibawasan Falls, Ardent Hot Spring and Santo Niño Cold Spring, and the Sunken Cemetery, church ruins and belfry in the old town of Catarman.

When reached by the Inquirer, the assistant secretary of the Department of Tourism (DOT) declined to comment on Camiguin’s tourism sales pitch.

But Art Boncato said the department’s “long-term objective is to be able to effectively communicate Mindanao’s strengths in tourism.” He cited Mindanao’s “magnificent topography for ecotourism and eco-adventure, unique crafts (woven fabrics, brassware and wood furniture), … the rich cultures of our communities, and bountiful seafood and tropical fruits.”

“We hinge our efforts on the strong leadership of local governments that shall provide the necessary impetus for communities to make tourism happen. Our messaging on Mindanao’s strengths should ultimately be the strongest voice out there so our current markets will continue to come. And new markets to follow,” Boncato said.

Investments are expected to go even higher, Romualdo said. Already, he said, a group of investors led by Hawaii-based Dr. Antonio Cordero had started building an 18-hole golf course at a cost of P200 million in Guinsiliban town.

“That meant thousands of jobs created for the construction alone and we expect it to trickle down to industries that will serve this labor intensive project,” he said.

To accommodate more visitors, a direct plane flight from Manila to Camiguin would start in March, Romualdo said.

Other projects include the 25-megawatt windmill facility, which the Spanish government will finance for more than P300 million.

“The construction of the 25-MW windmill will make the island’s power supply stable,” Romualdo said, adding that the green energy project would complement the island’s ecotourism approach.

Alan Juanito, spokesperson for the NPA’s North Central Mindanao Command, acknowledged the assessment in a text message to the Inquirer. “We are having a hard time in establishing a mass base there,” Juanito said.