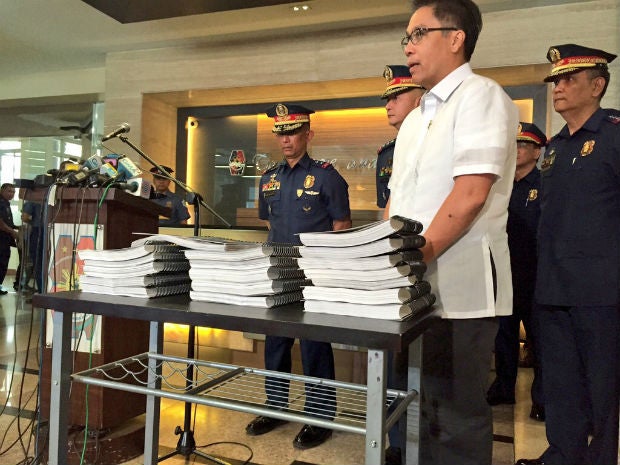 The PNP Board of Inquiry formally turns over to “The Mamasapano Report” to Department of Interior and Local Government Secretary Manuel Roxas II on Friday. JULLIANE LOVE DE JESUS/INQUIRER.net

MANILA, Philippines—Sacked Special Action Force chief Getulio Napeñas believes that the Board of Inquiry (BOI) has been “fair” in its findings on the botched Mamasapano operation, his legal counsel said Saturday.

In an interview with Radio DZMM, Atty. Vitaliano Aguirre said that his client is relieved that the report does not pin the blame solely on him.

(The BOI’s findings are commendable because it says that Napeñas is not solely to be blamed for the Mamasapano operation. He is not the only one who is accountable, but also Gen. Alan Purisima and President Benigno Aquino.)

(The BOI’s findings are quite important and fair. He sees that he can explain the matters being blamed on him.)

The BOI report, which was submitted to Philippine National Police officer in charge Leonardo Espina Thursday and made public Friday, said that Aquino, Purisima and Napeñas violated the chain of command when they deliberately failed to inform Espina about the operation.

The BOI report said Napeñas’ concept of the “way-in/way-out, by foot and night-only infiltration and exfiltration in an enemy-controlled community with unrealistic assumptions was a high-risk type of operation.”

“Oplan Exodus can never be executed effectively because it was defective from the very beginning,” it said.

It also said that from the beginning, Napeñas expected that at least 10 of his commandos would die in the Mamasapano operation. The operation, which was carried out on Jan. 25 to arrest high-value targets, resulted in the deaths of 44 SAF men.

“Considering sa laki ng operation, alam naman natin na hindi pupunta sa picnic ang SAF troopers. To be realistic about it, mage-expect ka ng casualty. Pero ‘yung 44, hindi niya ‘yun inexpect (Considering the extent of the operation, we all knew that the SAF troopers would not be going to a picnic. To be realistic about it, we would expect some casualties. But the deaths of 44 SAF men, he did not expect that).”

Aguirre said that Napeñas has yet to read the report in full and will come out with an explanation on the points raised against him.

Aguirre said that his client has been “depressed” since President Aquino blasted him during a gathering with religious leaders at Malacañang on Monday. Aquino said that Napeñas “fooled” him.

“After two days nu’n, medyo depressed siya nu’n (He was depressed for two days after the speech),” Aguirre said.

Napeñas, however, took comfort in the support of some netizens and religious leaders who expressed their sympathies according to his lawyer.

He also said that despite the constant blame Napeñas gets from the Aquino administration, he still has the support of the kin of the fallen 44 troopers.

(While the administration blames Napeñas, none of the relatives of the Fallen 44 blames him.)

Aguirre also said that the Mamasapano debacle has had a huge effect in Napeñas’ life especially because he can no longer spend time with his family the way he would before the operation.