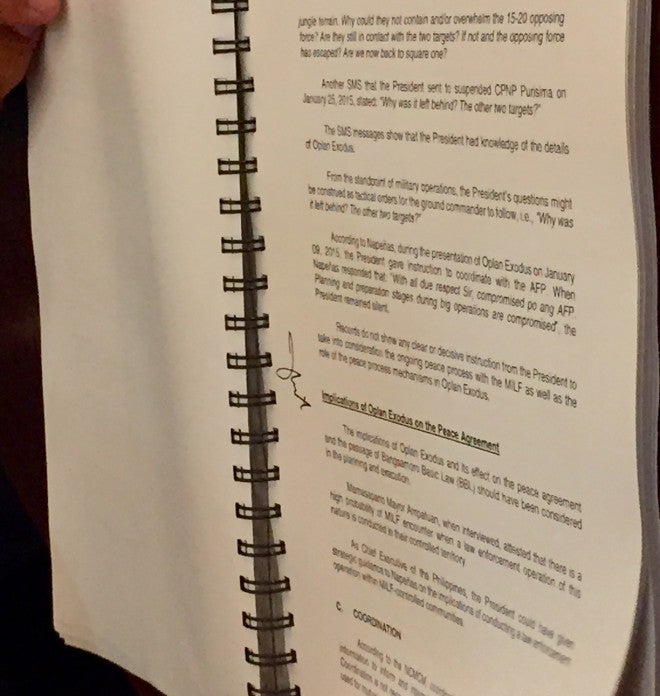 MANILA, Philippines–President Benigno Aquino III should have warned the Special Action Force that operating in a Moro Islamic Liberation Front (MILF)-controlled area would set back the Bangsamoro Basic Law, the Board of Inquiry recommended in its report.

Under the third chapter of the BOI report titled “Discussions and Analysis,” it said none of the records the BOI gathered showed that there was a “clear and decisive instruction” from Aquino to take into consideration the BBL before allowing the SAF to conduct a covert mission in Mamasapano, Maguindanao.

The report said that having been briefed about the “Operation Exodus” in Mamasapano, Maguindanao, Aquino, as the Chief Executive, should have given “strategic guidance to (Getulio) Napeñas on the implications of conducting of a law enforcement operation within MILF-controlled communities.”

Thus, the BOI recommended the implications of Oplan Exodus and its effect on the peace agreement and the passage of BBL “should have been considered in the planning and execution.”

Espina will then give Interior Secretary Manuel “Mar” Roxas II a copy of the report. Both were kept in the dark about the Operation Exodus.

Roxas, upon receipt of the report, will furnish the Office of the President a copy.

Earlier, the Malacañang said that when Aquino receives the Mamasapano report of the BOI, he will discuss the results with presidential legal team.