Fresh problems for US Secret Service: Are leaders doing enough? 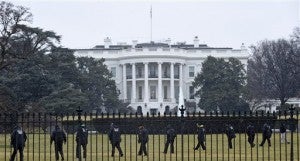 In this Jan. 26, 2015 file photo, Secret Service officers search the south grounds of the White House in Washington after an unmanned aerial drone was found on the White House grounds during the middle of the night. AP FILE PHOTO

WASHINGTON—The latest in a string of baffling missteps by the Secret Service prompted fresh questions Thursday about whether the Obama administration has done enough to root out deep-seated problems plaguing the agency charged with protecting the president.

Yet lawmakers charged with overseeing the agency were aghast and wondered how — after intense national scrutiny and a rotating cast of directors — the Secret Service still hasn’t corrected problems involving behavior of its agents. In a rare move, the top Republican and Democrat on the House’s oversight panel joined forces to say that while many of the agency’s top leaders have already been replaced, “this incident begs the question of whether that is enough.”

The two senior agents — including Mark Connolly, the No. 2 on Obama’s security detail — had been with other agents drinking at a bar last week when they returned to the White House in a government car, a U.S. official said. The vehicle entered an area already closed off by the Secret Service, who were investigating a suspicious package and had put the White House on lockdown. Officers on the scene saw the agents’ car, traveling slowly, make contact with a barrier, the official said.

Obama knew both agents personally. The two have been reassigned to nonsupervisory, non-operational jobs, a second official said. The officials weren’t authorized to comment on an ongoing investigation and requested anonymity.

The Secret Service’s response to the incident, first disclosed by the Washington Post, has also come under scrutiny amid a report by that newspaper that a supervisor directed officers on-scene not to perform a field sobriety test on the two agents, and to let them go home.

Yet with Obama standing by Clancy, it remained unclear what additional steps could or would be taken to bring the struggling agency in line.

When former Director Mark Sullivan resigned in 2013, the year after a drinking-and-prostitution scandal in Colombia rocked the agency, Obama tapped longtime Secret Service agent Julia Pierson to take over amid hopes she would change the male-dominated culture. Less than two years later, Pierson resigned abruptly in the wake of security breaches.

First, a man with a knife who scaled the White House fence made it far inside the mansion before agents stopped him. Then, as lawmakers started asking questions, it came to light that the Secret Service earlier had improperly allowed Obama to share an elevator in Atlanta with an armed, private guard — and failed to tell him about it after the fact.