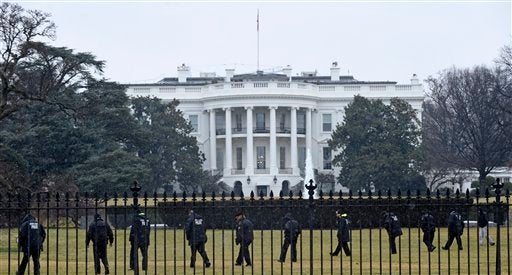 FILE – In this Jan. 26, 2015 file photo, Secret Service officers search the south grounds of the White House in Washington after an unmanned aerial drone was found on the White House grounds during the middle of the night. The Secret Service is investigating two senior agents after a car crash at the White House complex. Secret Service spokesman Robert Hoback says recently appointed Director Joseph Clancy has been briefed on the March 4 incident. The crash investigation is the latest embarrassment for the agency tasked with protecting the president. In the last six months several top agency officials, including former Director Julian Pierson, have been forced out amid revelations of multiple serious presidential security breaches. (AP Photo/Susan Walsh, File)

WASHINGTON–The US Secret Service is investigating claims that some of its agents crashed a car into White House security barriers after a boozy night out, The Washington Post reported Wednesday.

If the allegation is confirmed, it would only be the latest in a series of errors to taint the agency, which provides US President Barack Obama’s security team, following high-profile security breaches and a prostitution scandal.

The Secret Service was not immediately available to confirm the report, but spokesman Brian Leary told the Post that the probe would be conducted the Department of Homeland Security’s inspector general.

According to the paper, which has had a series of exclusives on troubles within the agency, on the evening of March 4, two agents — one of them a member of Obama’s elite close protection detail — crashed into the barriers.

The pair had allegedly been at a drinking party and agents at the scene had wanted to conduct a breath test to find out if they were inebriated, but were overruled by a commander who ordered the suspects home.

Last month, Obama appointed Joseph Clancy as the new head of the Secret Service after a critical report into an incident in which a mentally disturbed veteran scaled the fence and burst into the White House with a knife.

The previous head of the agency, Julia Pierson, resigned after the incident.

She had initially been appointed to clean up the service after a dozen agents were found to have hired prostitutes during a 2012 presidential trip to Colombia.

Colombian prostitute says she begged US agent to be paid