Senators back house arrest for Enrile 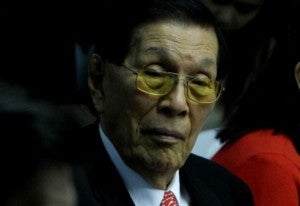 MANILA, Philippines–A majority of senators on Thursday let the Sandiganbayan know they were for placing Sen. Juan Ponce Enrile under house arrest given his advanced age and frail health.

Fifteen senators cosigned a letter Sen. Tito Sotto sent to the antigraft court’s Third Division, wherein he conveyed their sentiments and attached a copy of his privilege speech urging compassion for the 91-year-old Enrile who is currently confined in a private hospital.

They said the letter was in support of previous and future pleas to place Enrile under house arrest.

“Other senators have expressed conformity with the intent and tenor of said privilege speech, and the undersigned have taken this opportunity to submit the same as an attachment to any previous or future motion of the counsel of Senator Enrile seeking the grant of said house arrest,” the letter read.

Enrile is currently confined at the Makati Medical Center for pneumonia. Before this, he was under detention at the Philippine National Police General Hospital in Camp Crame.

He is detained on a plunder charge having allegedly pocketed his pork barrel in the multimillion pesos. Senators Jinggoy Estrada and Bong Revilla Jr. are detained at the PNP Custodial Center also in Crame on similar charges.

In his privilege speech, Sotto said Enrile should be allowed to stay in his home.

“Under present circumstances, justice is no less diminished should Sen. Juan Ponce Enrile be detained in his residence in Makati. He is not a flight risk and neither is he intending to be one,” Sotto said.

Sotto said he was not pleading for mercy, pointing out that Enrile had not been convicted of the charges against him.

“I simply want to rely on our operating principle that innocence is presumed. Furthermore, upon reaching the age of 70, even convicted criminals are considered for pardon under the present rules of the Department of Justice,” Sotto said.

“So I stand for compassion… and that judgment be withheld till all the evidence of guilt are in,” he added.