Peace panel: Where were you then, Alan? 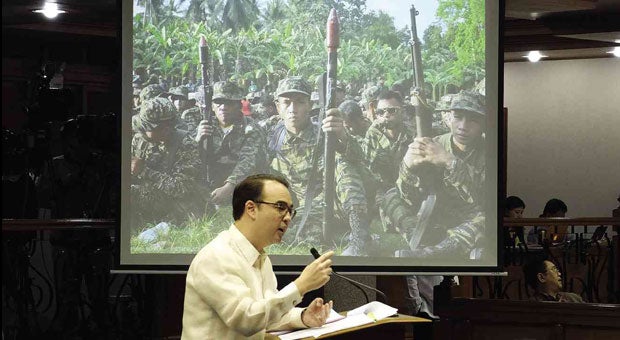 Members of the government peace panel on Thursday said they did not remember seeing Sen. Alan Peter Cayetano (in photo) at their Senate briefings on the peace process, even before the blueprint for the peace agreement, the Framework Agreement on the Bangsamoro, was signed in October 2012. JUN ANICETA/SENATE PHOTO

MANILA, Philippines–Where were you then, Alan?

Members of the government peace panel on Thursday said they did not remember seeing Sen. Alan Peter Cayetano at their Senate briefings on the peace process, even before the blueprint for the peace agreement, the Framework Agreement on the Bangsamoro (FAB), was signed in October 2012.

In fact, Lao said, she was quite surprised when Cayetano cosponsored the proposed Bangsamoro Basic Law (BBL).

“We were in constant consultation with the Cabinet cluster on security as well as the entire Cabinet during the course of the peace talks. It was not a few times but many times, because we needed guidelines from them and, of course, the President himself. Even if we wanted to hide (the claim about Marwan and Tundok), there would be other people who would tell the President. That’s something very difficult to hide from the President,” Bacani said.

But Malacañang said on Thursday that President Aquino would not dismiss Presidential Adviser on the Peace Process Teresita Deles and government chief negotiator Miriam Coronel-Ferrer.

“The President stands by the competence and integrity of those comprising our peace panel, from Secretary Teresita Deles to Professor Miriam Coronel-Ferrer, as the chairperson of the panel, as well as its members,” Communications Secretary Herminio Coloma said.

“I don’t recall him (Cayetano) appearing in our sessions with the senators even before the FAB was signed. And we were in constant touch with many people. In fact, after every annex was completed in Kuala Lumpur, we would post it on our website, talk to the media, to the lawmakers,” Bacani said.

Not in any of these instances did Cayetano show interest in discussing the peace process with the peace negotiators, he said.

For Lao, it is puzzling why Cayetano is now “questioning everything.”

“It’s not as if we kept the contents of the BBL secret. I really don’t understand where he’s coming from… You cosponsor [the BBL] then you, because of Mamasapano, make a 360-degree turn? What was the reason why you signed [to cosponsor the bill]? That meant you understood it and read it. Now you are attacking it,” Lao said.

Responding to Cayetano’s attack, Tundok, leader of the MILF’s 118th Base Command, said the senator’s claim was a “fabrication.”

“I wouldn’t even recognize him if I had the chance to meet him,” Tundok said.

He said his camp, located in a remote village in Datu Saudi town in Maguindanao, was far from Mamasapano, where Marwan was killed by the SAF commandos early on Jan. 25.

“If I was his protector, he should have been in our camp that day,” Tundok said.

“We will not make any move that will compromise the ceasefire with the government,” he said.

“I don’t want to answer the senator’s accusations point by point. I trust in the Filipino people to determine whether Cayetano is on the right track or not,” Iqbal said.