An encounter with ‘Toothless’ in Albay 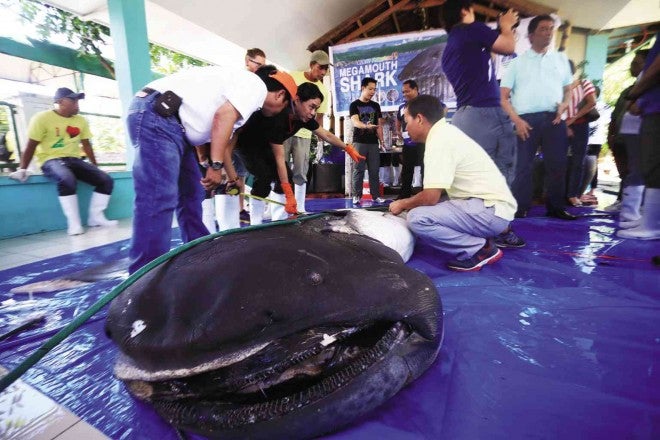 PERSONNEL of the Bureau of Fisheries and Aquatic Resources and nongovernment organizations join in the necropsy procedure to preserve the 15-foot rare megamouth shark named “Toothless.” MARK ALVIC ESPLANA

“Whenever I see it, I’m still amazed,” the 16-year-old student of Legazpi City High School said after her latest visit to the Albay Park and Wildlife in the provincial capital.

The public viewing of Toothless, the rare megamouth shark (Megachasma pelagios), was officially launched on March 3, in time with the celebration of World Wildlife Day. The preserved 15-foot male shark was put on display in the park early last month.

Authorities named the creature after a dragon character in “Gift of the Night Fury,” a computer-animated short film by DreamWorks Animation released in 2011.

Toothless was found dead on Jan. 28 after it accidentally got entangled in a fishing net along the shores of Barangay (village) Marigondon in Pio Duran town, Albay province. It died during its capture, according to results of a necropsy conducted by veterinarians led by Dr. Arnel Yaptinchay, founding director of the Marine Wildlife Watch of the Philippines, which aims to help people develop a better understanding of the marine environment.

In a text message, Yaptinchay said he believed the creature was healthy before it was caught in the net.

All internal organs of the fish were found “normal,” said Nonie Enolva, head of the Bureau of Fisheries and Aquatic Resources’ Regional Emergency Stranding Response Team.

There were no parasites or ulceration in the digestive tracts, and no cysts or any signs of tumor, Enolva said.

Yaptinchay said he was amazed by the 72-cm intestine, which looks smooth outside but has spiral features inside. “We found only oil in it, but there was no inflammation and even parasites. It was clean,” he said.

More than 100 tissue samples were taken from the shark during the necropsy, according to Enolva. She said documents and permits were still being processed for the transfer of the samples to Université catholique de Louvain in Belgium and the Canadian Shark Research Laboratory in Canada for toxicological analysis.

“We are still working for the gratuitous permit, memorandum of agreement and other requirements before we forward the tissue samples,” Enolva said. The permit is being issued by the Department of Environment and Natural Resources for any scientific or educational undertaking related to wildlife.

Soaked in formalin, Toothless has been placed in a specialized aquarium, measuring 5 meters long, 1.5 meters wide, and 6 meters high, at the Information Center of the Albay park. Two other preserved megamouth sharks have been on display in Iloilo and in Cagayan de Oro City since last year.

The five-hectare Albay Park and Wildlife, located between Lignon Hill and the airport, was established in 2001 and is home to 288 birds, including the Philippine Hawk Eagle and bleeding-heart pigeons, iguanas, reticulated pythons, a crocodile, red squirrels, monkeys and other endangered species.

It is also a picnic area with cottages, playgrounds, a large lagoon for boat rides and shade trees.

Cheryll Rebeta, park manager, said some 700 visitors had been viewing the shark in the aquarium daily. Entrance fees have increased by 40 percent, she said. (Adults pay P20 and children, P10.)

Santillan, who was with a group of students that arrived Tuesday morning to visit the megamouth shark display, said they wanted to spend more time in the park to know more about nature.

A schoolmate, Ian Jasper Villanueva, 15, was thankful that he had seen the creature he could find only in books, the Internet and in other parks outside Bicol.

“We’re so lucky that Albay has this rare animal. Though it’s dead, it’s of big help to students,” he said.

Mila Flores, 62, a resident of Ragay, Camarines Sur province, who came to the park for a picnic with her cousin and children, said she was “amazed” by the huge shark. “This is my first time to see an extraordinary creature,” she said.

In his message during the inauguration, Gov. Joey Salceda said the event was a reminder on the people’s obligation to protect the environment and its resources.

“We people have the capacity of self-protection; it is our duty to take care of the rest of the creation. It is also our responsibility to protect it and leave the same quality of resources to the next generations,” he said.