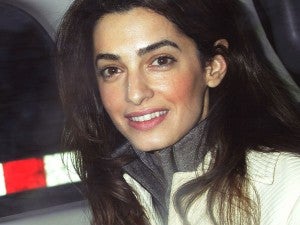 “We are presuming that lawyer Amal Alamuddin-Clooney is knowledgeable of the workings of the Philippine criminal justice system because it is patterned after the American system, which must be familiar to her. She must also therefore know that in such a system, the Executive is not the branch of government that issues commitment or detention orders of those accused of committing a crime,” de Lima said.

Clooney was quoted as saying the continued detention of Mrs. Arroyo has violated her human rights. Arroyo’s lawyers confirmed that Clooney filed a suit on Feb. 26 in the UN Working Group of Arbitrary Detention, a body under the UN Commission on Human Rights.

Clooney hoped to persuade the UN to call on Manila to release Arroyo, who is suffering from a disease of the spine and is under hospital arrest at the Veterans Memorial Medical Center in Quezon City.

But de lima, who called Clooney’s act as a “flamboyant gesture” said under international human rights standards, “a commitment or detention order issued against an accused in accordance with a State’s independent judicial processes is recognized as a valid cause for restraining one’s liberty.”

Arroyo is under detention for plunder pending before the Sandiganbayan in connection with the alleged misuse of P366-million intelligence fund from the Philippine Charity Sweepstakes Office (PCSO).

“There is no question that under no circumstances is Rep. Arroyo’s detention for the non-bailable crime of plunder violative of the Universal Declaration of Human Rights or the International Covenant on Civil and Political Rights,” de Lima said.

The Justice chief added that if Clooney thinks Mrs. Arroyo is being deprived of her liberty, she should instead direct her petition to the judiciary, “since the Aquino administration is not responsible for the fact that the judiciary does not subscribe to her claim that her continued detention is a result of political persecution.”

“Rep. Arroyo’s predicament are neither made grander nor more dramatic merely because they are raised by a celebrity lawyer before an international forum. The flamboyant gesture only reflects the paucity of her cries of political persecution,” she added.