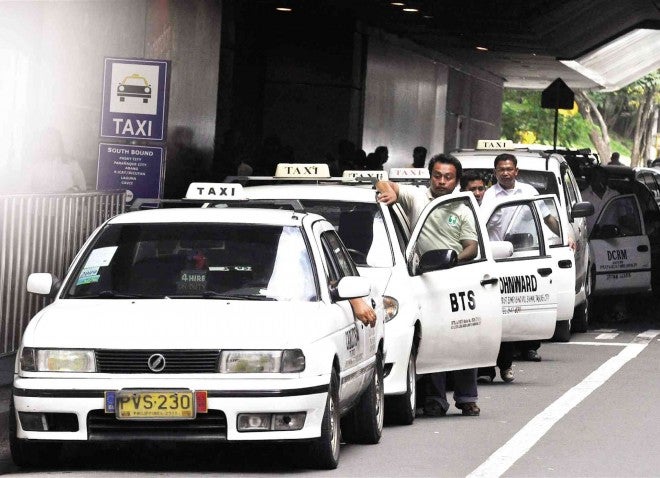 MANILA, Philippines—Twenty-four and counting. That’s the number of complaints the Land Transportation Franchising and Regulatory Board (LTFRB) has so far received a day after its order on a provisional P10 rollback in the taxi flag-down rate took effect.

On the second day of the rollback’s nationwide implementation on Tuesday, the LTFRB issued show-cause orders against five of the taxi cabs which were the subjects of the complaints sent via Twitter, the agency’s e-mail, hotline and through text messages.

In its order, the LTFRB directed the operators of the five taxis to explain within 10 days why their franchise should not be revoked. They were also ordered to ground the vehicle concerned, surrender its license plate and place the driver under suspension until he is presented in a hearing to be scheduled by the government agency.

LTFRB member Ronaldo Corpuz said that taxi operators found violating the flag-down rate rollback face a P5,000 fine on their first offense; a P10,000 fine and 30-day impounding of the concerned unit on their second offense, and a P15,000 fine and the outright cancelation of their franchise should they be caught a third time.

LTFRB Chair Winston Ginez stressed that his order would remain in effect despite a motion for reconsideration filed by taxi groups on Monday, the first day of its implementation.

“This isn’t discriminatory. We issued a similar order for jeepneys and they all complied,” Ginez pointed out in a press briefing on Tuesday. “We will not stop until they comply. This is a legitimate order. Everyone should follow this and not make up their own modus to avoid it,” he added.

Based on the complaints received by the agency, the reasons given by the drivers for their refusal to comply with the flag-down rate rollback ranged from ignorance to plain bullheadedness.

In an e-mail complaint Ginez received on Monday, a passenger observed that her taxi driver seemed unaware that the LTFRB order was already in effect.

“He told me not to preempt the P10 cut in the flag-down rate,” the passenger said.

Another complainant through e-mail reported that cab drivers in the Negros region denied that there was such an order from the LTFRB.

This bullishness was also experienced by the passenger who filed the complaint against the Twasco taxi. Twitter user @mimipmntn quoted her driver as telling her: “We don’t honor the P30 flag-down rate.”

To reduce confusion, the LTFRB started issuing free stickers to taxi drivers on Tuesday about its order.