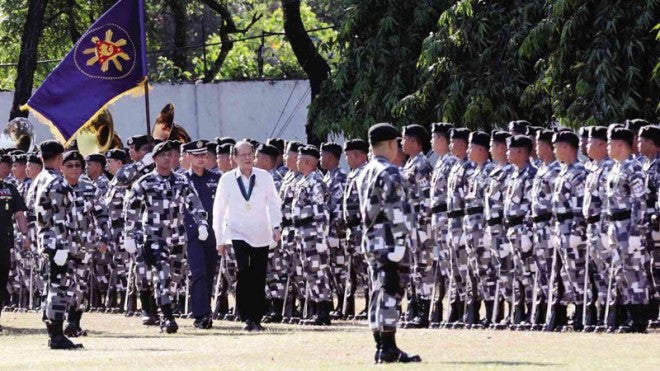 PRESIDENT’S GUARDS President Aquino troops the line of the Presidential Security Group (PSG) during the 29th anniversary of the PSG at Malacañang Park. In a speech, he hit back at critics demanding accountability over the deaths of 44 police commandos in Mamasapano, Maguindanao province, calling them “attention seekers.” GRIG C. MONTEGRANDE

MANILA, Philippines–President Aquino’s more detailed account of the circumstances that led to the Mamasapano debacle gave his critics more ammunition against him.

It drew not one praise but heavy flak from allies and critics alike, with one accusing the President of a cover-up, a day after he blamed the former head of the Special Action Force (SAF) of feeding him wrong information about the Jan. 25 police operation against two terrorists that ended in the slaughter of 44 police commandos.

A defiant Aquino on Tuesday hit back at critics demanding his accountability over the death of 44 police commandos, describing them as “attention-seekers.”

The President unburdened himself during the 29th anniversary of the Presidential Security Group, citing the “most intense criticism especially fabrications from attention-seekers.”

“I have courage because I’m doing what is right, and if I have shortcomings, God will take care of them, including my security,” he said in a speech.

“The President is engaging in a brazen cover-up of his responsibility and that of his trusted aide (resigned Philippine National Police Director General Alan) Purisima for the tragic SAF mission and placing all blame on the ground commander (Getulio) Napeñas,” said his erstwhile ally, Akbayan Rep. Walden Bello.

“This is the latest development in the shrinking of the man from a credible President to a small-minded bureaucrat trying to erase his fingerprints from a disastrous project,” said Bello, who declared on Tuesday that he was cutting his ties to the President.

Before a gathering of evangelical church leaders on the grounds of Malacañang, Aquino on March 9 absolved himself of responsibility for the Mamasapano fiasco, saying he “was given wrong information by the people who knew most of what was happening.”

The President noted that Napeñas, who was later sacked as SAF commander, had given him conflicting reports on the Mamasapano mission to get Malaysia terrorist Zulkifli bin Hir, alias “Marwan,” and his Filipino deputy, Basit Usman. Marwan was shot dead but Usman was able to escape.

Aquino acknowledged that he was communicating with Napeñas through Purisima, then suspended in connection with a graft case in the Office of the Ombudsman. Purisima resigned days after the Mamasapano debacle.