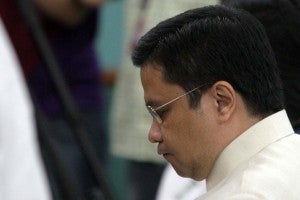 MANILA, Philippines – The Supreme Court on Tuesday denied the appeal filed by Senator Jose “Jinggoy” Estrada in connection with the findings of probable cause by the Office of the Ombudsman that led to the filing of plunder case and for his alleged involvement in the P10-billion Priority Development Assistance Fund (PDAF) scam.

“The Court denied the motion for reconsideration filed by petitioner Senator Estrada on the ground that no substantial argument was raised to merit reconsideration,” high court’s Information Chief Theodore Te said at a press conference.

Estrada’s lawyer went to the Supreme Court asking that it nullify the Ombudsman’s findings.

The detained senator argued that his right to due process and equal protection under the law was violated.

Estrada pointed out that the Ombudsman’s resolution “grievously ignored, trampled upon and violated” his constitutional rights to due process when it first denied his request and then later on filed charges against him using those affidavits which he added were “not disclosed to him.”

Estrada and his colleagues, Juan Ponce Enrile and Ramon “Bong” Revilla Jr. were among the government officials charged in connection with the multi-billion peso PDAF scam allegedly perpetrated by businesswoman Janet Lim-Napoles in connivance with lawmakers who channeled their pork barrel allocation to dummy non-government organizations she established.