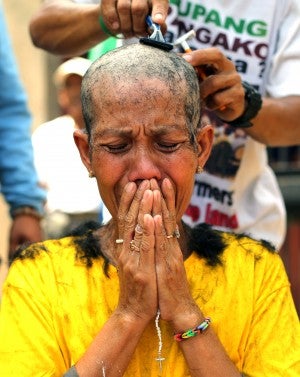 A woman has her head shaved during a rally at the gates of the House of Representatives in Quezon City on Monday, March 9, 2015. AP PHOTO/AARON FAVILA

MANILA, Philippines–Nine women had their heads shaved bald at the gates of the House of Representatives in Quezon City to send a message about the sacrifices of farmers against landed interests, including lawmakers who are landowners themselves.

The women, led by 66-year-old Dorita Vargas of Task Force Mapalad (TFM), called attention to the slow progress of a bill seeking to extend the coverage period of the Comprehensive Agrarian Reform Program (CARP) and implored lawmakers to put the measure on the floor.

“Look at us. Do not just look at the rich and powerful,” Vargas, a single mother of six, called out to House Majority Leader Neptali Gonzales II, whom TFM identified as one of the legislators opposed to House Bill No. 4296.

HB 4296 aims to extend the period the government can issue notices to landholdings not yet covered by the 27-year-old agrarian reform program for another two years.

A complementary measure, House Bill No. 4375, will create an Agrarian Reform Commission.

The House has sat on HB 4296 even though the agrarian reform committee had completed its report and submitted it to the plenary.

Vargas said she and the other women were willing to sacrifice their hair if only to show Gonzales and other lawmakers opposed to the bills what they were willing to give up in order to see genuine land reform.

“Our hair may be important to us women, but this is more important,” she said, showing her head shorn of its graying hair.

There was blood from a shallow laceration made by the razor.

She said the symbolic action was aptly timed a day after International Women’s Day, to show that the struggle for land reform was just as, if not more, important to wives and mothers.

Vargas was installed last year to a small parcel of land at a sugarcane plantation in Negros Occidental province after she personally received a promise from President Aquino in a meeting with farmers in Malacañang in 2013.

Benedicta Santillan, 50, who also had her head shaved, said she was an example of the urgency of passing HB 4296.

She said the government had not yet covered for CARP distribution the sugarcane plantation she was working on. “We have no land. All we get is P2,000 a year.”

Gonzales earlier said House leaders were reluctant to lobby for the bill because of “broad opposition” to the measure.

He said HB 4296 lost its priority status after the agrarian reform committee reported out a substitute bill that was different from the original House bill, which was certified urgent by Aquino.

“My job is to give any measure reported out by any committee a chance of being approved in the plenary. In fact, I even helped the committee last year to report out the HB that was certified by the President,” Gonzales said.

But Maricel Tolentino of Kaisahan said the farmer groups only wished that the measure be finally put on the floor for debate, and, hopefully, approved on second reading.

“We are lobbying already for the bill at the district level. But the important thing first is to put it on the floor. We will be able to muster the numbers when it comes to it,” she said.

The agrarian reform committee chair, Rep. Teddy Baguilat of Ifugao, earlier said he believed the panel had enough support for the pending measure.

“If there’s strong resistance from the landlords, there’s also strong support from other congressmen,” he said.

The Inquirer reported on Monday that based on figures released by the Department of Agrarian Reform’s legislative affairs office, supporters of HB 4296 outnumbered those opposed to the measure, 67-44.

A “mapping list” as of Feb. 18 showed that opponents of the bill include Gonzales, wealthy members of the Visayan bloc, including Negros Occidental Representatives Alfredo Benitez and Julio Ledesma IV, and the militant Makabayan bloc.

Recently, 81 Catholic Church leaders, led by 74 bishops, appealed to President Aquino and Congress to push for the extension of the CARP.

Enacted on June 10, 1988, the CARP was the centerpiece program of President Corazon Aquino.

The DAR said some 50,000 farmers would become new owners of land if Congress approved the bill extending the authority of the department to issue notices of agrarian reform coverage and accept voluntary offers to sell lands.