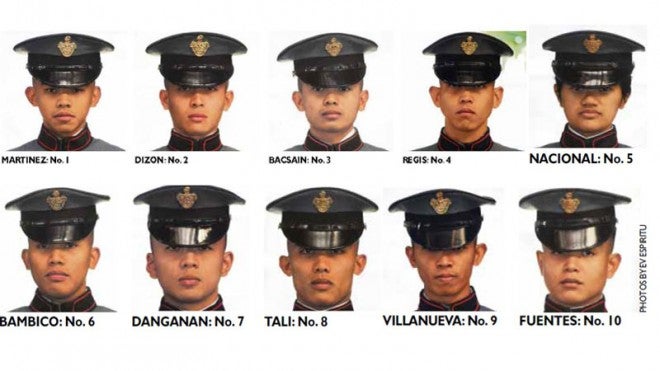 FORT DEL PILAR, Baguio City—Despite growing up just a stone’s throw away from the Philippine Military Academy (PMA), Arwi Martinez never got the chance to visit the sprawling campus of the country’s premier military training institution on a regular basis.

“We used to believe that one could not just enter PMA,” Martinez’s father, Dancio, told the Inquirer on Monday.

The Martinez family lives on Loakan Road, a kilometer away from Fort del Pilar, but unlike tourists frequenting the summer capital, Dancio said that a visit then to the home of the PMA was not a family priority.

Now, the PMA has become like a second home for Martinez. On March 15, he will receive the Presidential Saber from President Aquino for topping the PMA Sinag-Lahi Class of 2015.

Cadet First Class Martinez, 21, is leading the 171 graduates of the class, whose name comes from the Filipino phrase, Sundalong Isinilang na may Angking Galing at Lakas, Handang Ipaglaban ang Bayan—“Soldiers born with natural abilities and strength who are ready to fight for the country.”

Martinez is joining the Philippine Army.

The lone female cadet in the top 10 is Cadet First Class Caroline Jhoy Nacional of Maitum, Sarangani province, who ranked fifth. She is also joining the Army.

A substantial number of the highest achievers of the class come from Mindanao, who account for almost a third of the class, said Brig. Gen. Rozzano Briguez, PMA commandant of cadets.

The class only has 16 female cadets but they have excellent academic backgrounds, said Lt. Gen. Oscar Lopez, PMA superintendent. Nine of the graduating cadets were high school valedictorians before they entered PMA, he said.

Martinez is the seventh Cordilleran to be class topnotcher and the latest top cadet to come from Baguio City, said the PMA spokesperson, Maj. Fara Krishna Candelaria.

The PMA Academy Scribe cites three other Baguio topnotchers from 1938 to 1999: Sebastian Arrastia of Class 1959, Angel Evangelista of Class 1987, and Gerardo Gambala of Class 1995. Gambala was a classmate of Sen. Antonio Trillanes IV.

Martinez is fourth in a brood of five. His father, Dancio, works at the Cordillera surveys and mapping division of the Department of Environment and Natural Resources.

Martinez’s mother, Lolita, also worked briefly for the same agency before she decided to focus on raising her children.

Dancio said he did not object when Martinez told him he wanted to enter the PMA.

“I was really nervous when he made the decision but we left that up to God,” he said in Filipino.

Dancio said raising money for all of his children’s tuition had been tough but they did well, particularly Cadet Martinez, who was first honorable mention when he graduated from the Baguio City National High School in Loakan here.

“My son is studious and God-fearing,” he said. “He serves the church by playing the guitar during Mass.”

Martinez’s diligence showed in the PMA. Cadets are granted study time from 7 to 9:30 p.m. and the Sinag-Lahi topnotcher used that period to finish all his academic requirements, enabling him to focus on his physical training sessions.

Martinez said he planned to use his assignment as an officer of the Army to “influence the soldiers I would lead.”

Nacional, 21, said she was exposed to conflict in her hometown of Maitum as early as when she was 8 years old.

As a child, she said, life was scary but the presence of the military in their midst had a calming effect on the community.

Her father, PO3 Howard Nacional, is a chief police investigator of Maitum. Nacional’s mother is a municipal environment management specialist.

Nacional originally wanted to become a doctor and took two years of a medical technology course but a hunger for challenges brought her to the PMA.

“I needed to face something new,” she said.

Nacional, a grade school salutatorian and a high school valedictorian, said she would be the first soldier in the family.

Cotabato-born Cadet First Class Jul Laiza Camposano, who will receive the Sports and Physical Development Plaque, said her life was peaceful as a child of a farmer and of a government statistician.

Ranked 81st in the class, Camposano, 24, will take center stage on Sunday when she receives the PMA Athletic Saber.

In Zamboanga City, Tausug fish vendor Nul Tali was in tears when he received a text message from his son Steven on March 7 telling him: “Father, just be quiet, I am top 8 in our graduating class.”

Tali said he thought his son, whom he called “Miki-Miki,”was joking.

“Miki-Miki is a studious boy. He is used to hardship,” hesaid.

Steven’s mother, the second of Nul’s three wives, left the family when he was in kindergarten.

“I was able to raise the family through fish vending,”Nul said. Steven grew up with five sisters.

“I did not want my children to be like me. I only finished fourth grade. That’s why I’m always proud when I see my children go up the stage as honor students,” he said.–With reports from EV Espiritu, Inquirer Northern Luzon; and Julie S. Alipala, Inquirer Mindanao

Where have all the women PMA grads gone?