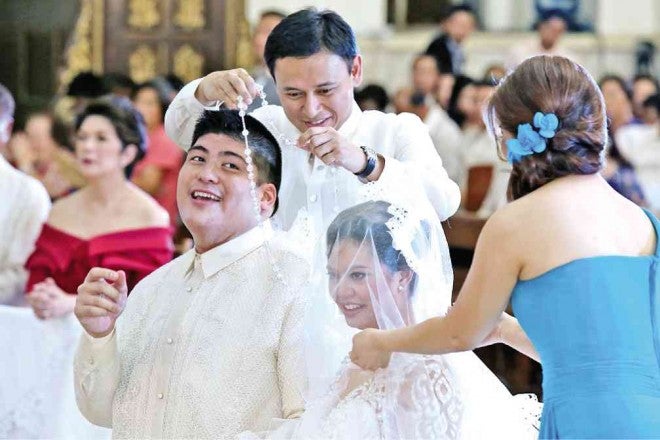 MANDAUE CITY—It was dubbed Cebu’s “Wedding of the Year” in a city whose people have grown accustomed to grand nuptial shows.

At least 3,000 people gathered outside the church to catch a glimpse of the 300 high-profile guests, members and friends of both families. At least 50 policemen secured the grounds.

Even though new air-conditioning units were installed inside the church, Quisumbing decided to open the doors to allow the public to see the spectacle.

A scene stealer was a toddler on a red bicycle, whose front carried a whiteboard swamped by white roses and bearing the words: “My favorite uncle is getting married.”

The bride started to walk down the aisle at 3 p.m., looking spectacular in a gown by Cebu’s top designer, Cary Santiago.

Cebu Archbishop Jose Palma, who officiated the ceremony, reminded the couple to always put their trust in God. “When trials come and problems become part of our life, Pope Francis said, ‘We know he will not abandon you,’” he said in his homily.

Two buses and 15 Toyota Coaster minibuses ferried guests from the church to the reception venue at the plush Radisson Blu Hotel at the North Reclamation Area in Cebu City.

Actress Marian Rivera and her husband, actor Dingdong Dantes, as well as actor Piolo Pascual were also seen at the reception.

The newlyweds come from wealthy families. Quisumbing, now on his second term, is the grandson of Norberto Quisumbing Jr., chair of the Norkis Group of Companies based in Mandaue.

Norkis businesses include production, distribution, sale and servicing of Chinese motorcycle brands and multicabs. It recently ventured into the business process outsourcing (BPO) office building development with the opening of Norkis Cyberpark, a six-tower development project in Mandaue.

Hofileña belongs to an old rich family in Silay City in Negros Occidental province. The family is into sugar production and construction.

Quisumbing, 37, met Hofileña, 35, when he was 14 years old. He had admitted in an earlier interview with reporters that Hofileña was his first crush.

Quisumbing left for the United States to complete his secondary education. After 20 years, he again met Hofileña, the best friend of a cousin, in March 2014 during the wake of his grandmother in Manila.

This time, the man didn’t let her go.