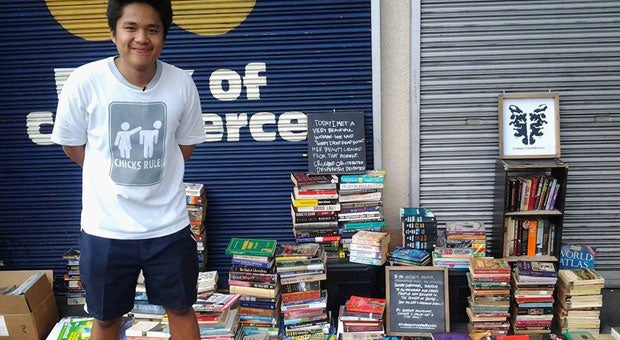 On a busy sidewalk in Quezon City, a teenager who dreams of becoming a lawyer sells what he believes are the most precious things in the world: books.

“If there is something that anyone can have in excess, it’s learning,” said Justin Adriel de Castro, 19, the subject of a social media post that went viral recently and who has since earned the title “the boy who cried books.”

Fifty-eight days after running away from home on Dec. 26, De Castro has found a way to earn a living and possibly raise money to go back to school.

Starting at 9 a.m. during weekends, De Castro neatly stacks up his books on the brick sidewalk and some on a display shelf at Tomas Morato Avenue and Scout Lazcano Street in Quezon City.

In the middle of the piles of books stands a chalkboard on which De Castro writes notes on his thoughts for the day.

Wearing a loose shirt, a pair of shorts and flip-flops, and surrounded by street kids from the area, De Castro sits on one spot and calls on passersby to check his secondhand books, which are priced from P50 to P300.

De Castro has drawn the admiration of some book lovers, who have offered to help him.

A creative consultant designed a logo for him for free, and another book lover offered to set up his online bookstore.

A Facebook page, “theboywhocriedbooks,” has been set up for him so people will know what titles he is offering and where he can be found.

As his story went viral online, help poured. Lawyer Irwin Peña, a professor at the National College of Business Administration (NCBA), promised to help him by donating books.

After he told De Castro’s story to his students at the NCBA, Peña’s students came to class with dozens of used books to be donated to the boy.

“His story is inspiring a lot of people. I see myself in him when I was still dreaming to be a lawyer,” Peña said in a telephone interview.

De Castro’s is not a simple story of a poor boy struggling to finish school and become a lawyer, but a tangle of family problems.

His parents who own a school in Romblon province have long been separated.

He was diagnosed with bipolar disorder, a manic depressive illness, after several attempts to kill himself, primarily because of the conflicts in his family.

In an interview with the Inquirer, De Castro described his family as “well-off but broken.”

A day after last Christmas, De Castro ran away from home after a heated argument with his mother.

“I was forced to move out of my apartment in New Manila. I came back a few days later to get my clothes, but the lock on the door to the apartment had been changed,” he said.

He hoped his mother would reach out to him and pay for his schooling at the University of Santo Tomas. But after a week, he gave up and decided to do something to survive.

He had P2,500 and he decided to buy 23 bottles of pure honey, which he had been taking as part of the treatment for his disorder.

De Castro peddled the honey in the streets.

“But it was not a hit so I had to think of something else,” he said.

“I started doing it out of sheer necessity. I need to survive. I have to feed myself,” he said.

He got his first 14 books from thrift shops on Recto Avenue in Manila and picked a spot under a tree in front of a coffee shop on Tomas Morato where he usually hung out.

There, he spread out the books for passersby to see. But soon the guards at the coffee shop shooed him away.

Like an ambulant vendor, he hopped from one place to another where he was allowed to sell his books.

On weekends, the guards at a bank allowed him to display his books on the sidewalk.

“I don’t like sympathy. I am proud that I am selling books. I’d rather sell knowledge in this country where prostitution is prevalent and where illegal drugs are everywhere,” he said.

At night, De Castro sleeps in apartelles or at the open space behind his locked apartment in New Manila.

What is your wolf?

De Castro explained why he came to be called “the boy who cried books.”

He said at one point after his attempts to kill himself, his father started not to take his acts seriously.

“You are like the boy who cried wolf,” his father told him, he said.

They had an argument and his father stopped supporting him, he said.

He said he could never forget his father’s words. Now, he said, whenever buyers come, he asks them, “What is your wolf? What are your problems?”

De Castro said some people would tell him their stories and problems without inhibition. In return, he would recommend books that fit their situation.

De Castro said he opened a bank account to save his earnings.

He recounted how those 58 days in the streets changed him and kept him sane if not cured his disorder.

“Books and the conversations with the people are the cure. These make me happy,” he said, adding that he preferred selling books in the streets to working at a call center.

He said he realized that his problems had also evolved in the last two months.

“In the first few days, I was worrying only about where to go and where to sell my books. Now I am worried about the BIR (Bureau of Internal Revenue) taxes and Kim Henares,” he said.

How to love to read—without books

A boy’s abiding love for reading