A former employee of Margarita “Tingting” Cojuangco on Friday accused President Benigno Aquino III’s aunt of ordering the theft of election ballots in Baguio City to discredit the 2013 elections by making it appear that there was massive electoral fraud.

In an affidavit he executed at the Commission on Elections law department, Worthy Acosta, who claims to be a former executive assistant of Cojuangco, said his former employer ordered him to steal ballots from the Baguio City Treasurer’s Office sometime in June 2013.

Acosta said Cojuangco, who ran unsuccessfully for senator under the United Nationalist Alliance (UNA) in the May 2013 elections, appeared to have an ax to grind against President Aquino.

Acosta said Cojuangco was aided by a former Biliran congressman, Glenn Chong, who ordered him to tamper with the ballots. 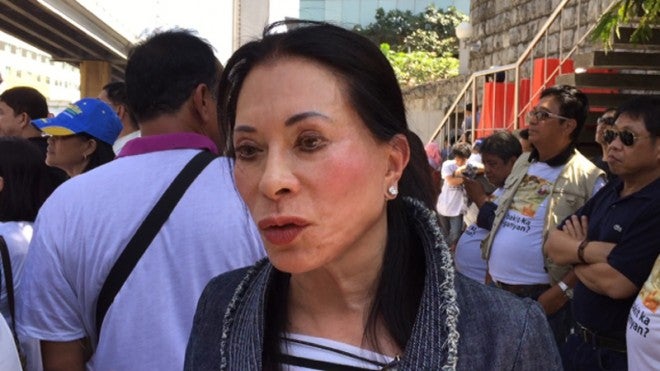 “Sometime before June 30, 2013, I was instructed by Tingting, upon the suggestion of Glenn, to travel to Baguio to retrieve ballots which they were sure would prove election fraud,” said Acosta in his affidavit.

Acosta said he was executing the affidavit to expose the violations of the Omnibus Election Code and other relevant laws committed by the various personalities mentioned in his affidavit and to request the Comelec to conduct the appropriate investigation and prosecution of these offenses.

Reached for comment, Cojuangco denied that she had instructed Acosta to steal ballots from the Baguio Treasurer’s Office.

“I never instructed [Worthy Acosta] to steal ballots,” Cojuangco, who is one of the leaders of a movement which described in detail how cheating purportedly took place during the 2013 automated elections, said in a phone interview.

Cojuangco said it was Acosta who had approached her claiming to have access to evidence of election fraud in Baguio City.

But she said she never had custody of Acosta’s evidence.

During the Senate hearings on the election fraud charges last year, “we asked the Senate if we could present evidence of cheating and we were told we could not,” Cojuangco said.

She said the Senate would have granted her group immunity from a lawsuit if the evidence had been presented at the inquiry. Instead, the senators told her and her group to take their evidence to the Department of Justice, she said.

In his affidavit, Acosta said he, Cojuangco and Chong had been involved in making propaganda materials, including PowerPoint presentations, leaflets and video clips, that supposedly exposed election fraud in the automated elections.

“The intention of this propaganda was to convince the public to rally behind our cause and against the automated election system. The goal in view was to mobilize supporters and sow dissatisfaction toward the present administration using the issue of massive election fraud,” he said.

“It was very evident from discussions with Tingting, as well as her actions that she despised her nephew, President Noynoy Aquino (P-Noy). She believed that Noynoy purposely removed her as president of Philippine Public Safety College (PPSC). And then there was the postponement of the ARMM elections in 2013 where she was set to run as vice governor, as well as a number of rejected favors, which all added to her displeasure [with] the President,” Acosta said in his statement.

“As such, Tingting holds interest in any issue that reflects negatively on the present administration, especially the President, and not just the 2013 elections,” he added.

Acosta said he joined Cojuangco’s team immediately after the May 2013 elections. He claimed to be privy to Cojuangco’s dealings, mostly matters “which she cannot, in confidence, entrust to other people.”

He said he attended and witnessed several meetings, mostly attended by political figures who lost their election bids in 2013, at Cojuangco’s Dasmariñas Village residence in Makati City.

“The meetings were mostly devoted to discussions of electoral fraud and massive cheating in the 2010 and 2013 automated elections. The politicians wanted to show that they lost the elections because they were cheated,” he said.

Acosta said Chong, a severe critic of automated elections having lost in the 2010 and 2013 polls, was invited by Cojuangco to their meetings.

Chong pointed out that the best way to prove election fraud was to take a look at the actual ballots used in the 2013 elections, Acosta said.

He said Chong suggested an island in Biliran province called Maripipi where regular power outages occur, hence, its Treasurer’s Office could be easily broken into to obtain ballots.

“However, the Maripipi Island plan did not materialize as Tingting suggested that we turn to Baguio instead. She said we can easily access the Treasurer’s Office in Baguio because she had strong connections in the area, particularly former Rep. Bernie Vergara of the lone district of Baguio City,” Acosta said.

“[Chong] said Vergara was eager to prove election fraud in Baguio City after placing third to victorious candidate Rep. Nicasio Aliping during the 2013 polls,” he said.

Acosta said that upon arrival in Baguio City, he met with Vergara, who was accompanied by his press relations officer named Ferdi Balanag. He said it was Vergara who provided the details on how they would retrieve the ballots from a warehouse where they were stored.

Acosta said it was he and Balanag who went inside the warehouse, which was unlocked by people from the Treasurer’s Office.

“I put the ballots inside my backpack, closed the ballot box and carefully placed the packaging tape back around it. I carried it back to the corner where it was stacked,” said Acosta.

He said Chong instructed him to tamper with the ballots and make it look like Vergara was defrauded and show that his true number of votes were not reflected in the election returns of the ballot box concerned.

“Glenn said it should appear that the actual votes of Rep. Nicasio Aliping as shown in the ballots were significantly increased in the election return. He said we had to make Vergara believe that there was rigging, even though there was none, to make him join our cause,” said Acosta.

He said Chong also instructed him to tamper with the ballots so that Cojuangco’s votes would significantly increase.

“This was done to boost her votes in the actual ballots, which, in truth, was very shamefully low,” Acosta said.

Upon his return to Manila, Acosta said he told Cojuangco about the retrieval operation, “but left out certain details like the tampering of the ballots as instructed by Glenn and the fact that I failed to obtain all of the ballots in the ballot box I opened.”

He said they then started making propaganda materials, which were incorporated with the stolen and tampered ballots from Baguio City.

The propaganda materials included a video recording showing an anonymous person detailing supposed fraud in the automated polls; and a PowerPoint presentation showing tampered ballots and other questionable documents that would support the 60-30-10 pattern of election rigging, among others.

[In the so-called “60-30-10 pattern” of election cheating in the 2013 senatorial election exposed by an Ateneo de Manila University math professor, candidates in the so-called Magic 12 belonging to the administration’s Team PNoy consistently obtained about 60 percent of the total votes; followed by candidates from the United Nationalist Alliance, who got about 30 percent; and independent senatorial candidates, 10 percent.]

It was also during their nationwide campaign on election fraud in different schools and universities that the propaganda materials were used by Cojuangco, Chong, Lagman, Magdamo and Averia, he said.

“In these gatherings, Chong and the others repeatedly presented the ballots I stole and tampered. These were presented as genuine and as evidence of election fraud even though Chong knew of the tampering while most of the others knew the ballots were stolen,” Acosta said.

He added that around September 2013, when the Priority Development Assistance Fund (PDAF) was gaining widespread attention, meetings at Cojuangco’s Makati home started gearing toward bigger issues than election fraud.

“Moves were likewise taken to get more prominent personalities who were known to be anti-P-Noy administration to join the cause,” he said.

According to Acosta, he would later learn that the group that constantly met with Cojuangco was now calling itself the National Transformation Council (NTC).

The NTC has recently been spearheading calls for the resignation of Mr. Aquino.

Acosta said he left the employ of Cojuangco in June 2014 after he was accused by the latter of financial misconduct at TS Trading, a business that he claimed was owned and operated by Cojuangco and Chong.

He said he presented his testimony to Brillantes, who provided him with security and set up meetings with Justice Secretary Leila de Lima to arrange his possible inclusion in the government’s witness protection program.

Brillantes, who has also submitted an affidavit to the Comelec law department, said he was convinced that there were election laws that were violated by Cojuangco, Chong and the others involved in the operation to make it appear that there was election fraud in 2013.

“Definitely, stealing of the official ballot, getting it without permission is already in violation of the election code, which is an election offense,” said Brillantes in a separate interview.

According to Brillantes, who said his affidavit was for the purpose of conducting a preliminary investigation, he was helping develop a possible electoral sabotage case, which carries a penalty of life imprisonment, against the perpetrators by talking to other potential witnesses.

He said he was doing this as a way to help the Comelec fight the critics of the automated election system, especially with the 2016 national and local elections fast approaching.

“I want to help the commission so that these people will shut up. They just won’t stop and they surface everytime there is an election coming,” he said. With a report from Vincent Cabreza, Inquirer Northern Luzon