War not an option, say peace groups on 40th day of Mamasapano tragedy

MANILA, Philippines—Various peace advocate groups called for peace and the continuation of the peace process on Friday during the commemoration of the 40th day of Mamasapano tragedy.

“We call this a National Day Toward Healing for Justice, Unity and Peace. In our culture as Muslims and Christians, (on) the 40th day we commemorate the death and we feel this is a time for healing,” All-Out Peace convenor Gus Miclat said.

“But itong paghihilom ang elements nito paghahanap ng justisya, katotohanan (But to heal we have to seek justice and truth).”

Miclat said those involved in the peace talks should go back to the negotiating table and strategize how to ensure incidents such as the one in Mamasapano would never happen again.

“War should never be an option,” he said. 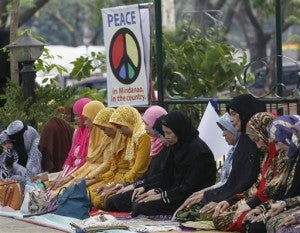 Filipino Muslims pray during an interfaith rally to call for unity and peace in southern Philippines Friday, March 6, 2015 at a park in Quezon city, northeast of Manila, Philippines. AP

The All-Out Peace campaign aims to reject war of any form in response to Mindanao conflicts, including the Mamasapano, Maguindanao, clashes which resulted in the deaths of 44 Special Action Force troops, 18 members of the Moro Islamic Liberation Front, and five civilians.

“I think that’s not what the people think. They aren’t aware of what’s happening,” he said, adding the issue elicited such high emotions that many people used it for their own various agenda.

Guingona expressed sympathy and hope that there would be justice for the victims of the incident and that the truth would be revealed in the results of the board of inquiry to be released soon.

At 6 a.m., the group rang the peace bell followed by an interfaith prayer where the Muslim participants were with Christians, lumads and other faiths.

The event will be culminated with an interfaith prayer at Edsa Monument in the evening.