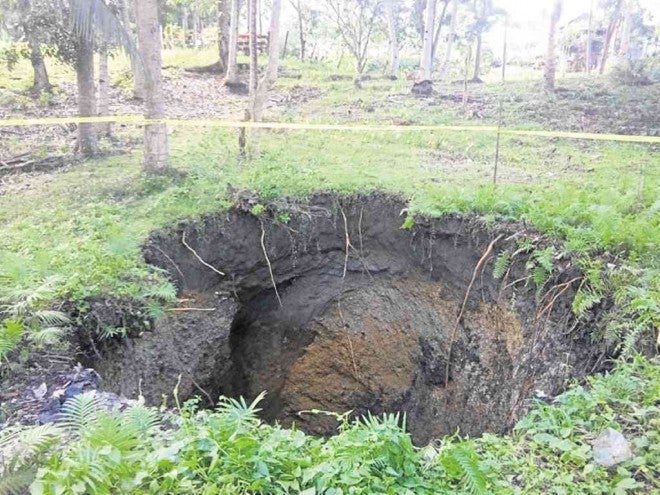 A sinkhole in Tagbilaran City in Bohol province. Erosion in General Santos City in South Cotabato.

Residents and officials of the two areas are confronted with what appears to be natural phenomena that are threatening communities near them.

In Tagbilaran, the Central Visayas office of the Department of Environment and Natural Resources (DENR) are taking a closer look at a sinkhole in the village of San Isidro that is 6 meters wide and 30 meters deep.

It was found on a lot owned by a Filomena Lim.

No one knows yet how it formed, but Rosita Lipio, property caretaker, quoted a nephew as saying it seemed like the earth suddenly opened. It happened past 4 p.m. on March 1.

Lipio reported it quickly to village officials, expressing fear the sinkhole would grow bigger. Village sentinels were sent to cordon the area off.

“It may appear in the surface that the land is still intact but cavities start to scour due to ground vibration, water seepage and fractures or joints on the surface,” he said.

Llamedo said he believed the sinkhole is one of the effects of the 7.2-magnitude quake that struck Bohol on Oct. 15, 2013 but which manifested itself only now. The quake killed 201 people in Bohol.

The Central Visayas office of the DENR said data and images provided by the National Mapping and Resource Information Authority listed 1,182 sinkholes in Bohol.

In General Santos City, authorities had evacuated people living near a shore that had eroded by 100 meters.

The city government declared the community called Tinago in the village of Barangay South as “no-build zone” following the discovery of the erosion, which had grown to 70 meters in diameter and 60 meters deep. 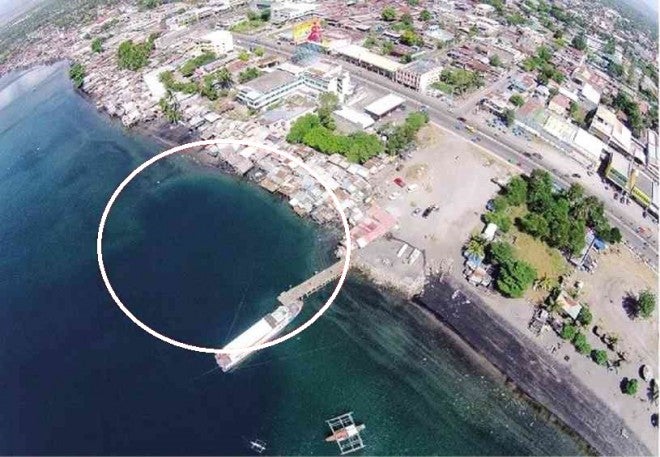 Erosion of the coast in General Santos City. RONALD VELASQUEZ

Mayor Ronnel Rivera said an aerial survey of the area showed the extent of the erosion.

Dacera said while only the Mines and Geosciences Bureau (MGB) could declare what it is, “based on our assessment, it is coastal subsidence.”

He said a few meters from the shores of Tinago, an underwater precipice of a steep cliff around 25 meters deep was located and that the movement of the sea over the years has eroded parts of it, causing the erosion.

“When compared to a surface phenomenon, what happened there is definitely a landslide,” he said.

Dacera said the city is expecting a team from the MGB national office to examine the phenomenon.

Results of the MGB study would be used by the city government in “disaster-proofing” the village of South and nearby coastal communities, said Dacera.

“Sinkhole or not, the risks are still high and looming for the residents of Tinago,” said Mayor Rivera, who had ordered the evacuation of at least 37 families living in the area.