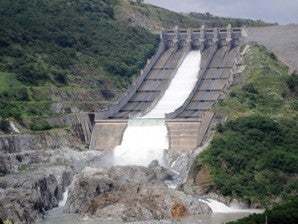 PREEMPTIVE RELEASE The San Roque Dam in San Manuel, Pangasinan, opens one gate to release water on Thursday to ease pressure on the facility from the expected heavy rains of the incoming Tropical Storm “Quiel.” Pangasinan towns located downstream are bracing for possible floods. The dam collects water released by the Binga and Ambuklao Dams in Benguet. WILLY LOMIBAO/CONTRIBUTOR

The sun has been shining intermittently since Typhoon “Pedring” exited the country on Wednesday, but much of the provinces of Bulacan, Nueva Ecija, Pampanga and Pangasinan remain inundated.

On Thursday, most of the major dams in Luzon continued to release their contents in anticipation of Tropical Storm “Quiel.”

As the waters gushed, the governments of Pangasinan and Bulacan called on Malacañang to review flood-control protocols, blaming outdated rules and even the national government’s irrigation design for their provinces’ vulnerability to flooding.

Authorities on Thursday gave the go-signal for San Roque Dam in San Manuel, Pangasinan, to spill water, alarming residents downstream. San Roque is the sixth dam to be opened this week.

The gates of Angat, Ipo, Ambuklao, Binga and Magat Dams remained open Thursday because the waters were either close to breaching or had breached the spilling level, and holding the waters could burst the dams.

Besides, it is necessary to spill water from the six dams in view of the expected heavy rainfall from Quiel, which is forecast to make landfall in extreme northern Luzon on Sunday, according to weather bureau hydrologist Elmer Caringal.

“It’s more dangerous if we [open the gates] when the waters have reached critical level and when Quiel is about to make landfall,” he said.

Caringal said National Power Corp. (Napocor) and the National Irrigation Administration (NIA) were releasing water minimally from the dams in the face of residents’ complaints that the water releases were causing floods downstream.

He said he believed that the floods were caused by the heavy rain dumped by Pedring and the high tide.

On Wednesday night, Tommy Valdez, San Roque Power Corp. (SRPC) vice president for corporate social responsibility, informed media offices by text message that Napocor had directed the opening of one of the dam’s spillway gates at a half meter to release water at 79 cubic meters per second (cms).

Valdez said the gate opening was made in anticipation of more rains from the new storm.

“We were all nervous,” said Barangay (village) Captain Jesus Limos of Lipay. The vegetable-producing barangay lies along the Agno River in the town of Villasis.

It normally takes four hours for water released from San Roque to reach the town.

Villasis Councilor Roderick Mina said the residents’ fear was based on the trauma they experienced in 2009 when the sudden release of water from the dam caused a huge flood.

Former Pangasinan Representative Mark Cojuangco said San Roque should have released water by as much as 500 cms. He said that the volume of 79 cms was “too small” to ease pressure on the dam, and that 500 cms would not cause a flood.

Cojuangco said, however, that the dam operators were constrained from undertaking this suggestion because the pressure would crush the NIA weir (overflow dam) at the bottom of the spillways.

“My point is: Just because of irrigation, public safety is compromised. The [weir’s current design and location] is not right and they have to correct it,” he said.

Bill Connel, SRPC vice president for dam operations, said this was the fourth time that San Roque’s gate was opened since it started commercial operations 12 years ago.

In comparison, water was released 54 times from Binga Dam in Benguet in the same period.

All at same time

Since Tuesday, Binga and the recommissioned Ambuklao Dam, both located in Mountain Province and both flowing into San Roque Dam, have also been releasing water. Both are operated by SN Aboitiz Power.

Napocor opened the gates of Angat Dam in Marilao, Bulacan, at 8 a.m. Thursday to release water at 400 cms when the dam water elevation reached 214 masl. The dam’s spilling level is 210 masl.

Said Bulacan Governor Wilhelmino Sy-Alvarado: “This is what I was afraid of. Bustos Dam, Ipo Dam and Angat Dam suddenly released water at the same time, which is why our communities are flooded, as well as the impact of typhoon rains. Had authorities opened their floodgates gradually and much earlier, we wouldn’t have floods.”

Earlier, Alvarado asked the National Water Resources Board (NWRB) to allow Napocor to decide on the appropriate level for releasing dam water.

The NWRB has oversight over Angat because it also supplies Metro Manila’s potable water and irrigates parts of Central Luzon. The board prescribed that Angat release water as soon as the level reached 210 masl.

Napocor was allowed to release Angat water on Tuesday when the elevation reached 209.60 masl.

Rodolfo German, general manager of the Angat Hydro Electric Power Plant, said the NWRB had yet to act on Alvarado’s request.

In Bulacan, most of the barangays in the towns of Norzagaray, Angat, San Rafael, San Miguel, Bustos, Baliuag, Plaridel, Calumpit, Hagonoy and Paombong are under water.

The local governments of Calumpit, Obando and Meycauayan have declared a state of calamity in their flooded towns.

Floodwaters have reached 3 meters (10 feet) in Barangay Sapang Bayan in Calumpit, according to reports that reached the Provincial Disaster Risk Reduction and Management Council yesterday.

The same reports said residents had been feasting on milkfish that had escaped fishponds in Calumpit and Hagonoy.

In Pampanga, the towns of San Luis, Arayat, Candaba, Apalit and Masantol are flooded because the swollen Pampanga River had breached its banks.

Residents of low-lying towns near the Pampanga River, such as Sta. Rosa, Jaen, Cabiao, San Isidro, Aliaga, Quezon, Zaragoza and Licab, said the floods were unprecedented.

Nueva Ecija, where all but one of Cabanatuan City’s 89 barangays is under water, has been put under a state of calamity by its provincial board.

Residents of San Antonio town said it was the first time in many years that their public market was inundated. With reports from Gabriel Cardinoza and Yolanda Sotelo, Inquirer Northern Luzon; and Carmela Reyes-Estrope, Anselmo Roque, Armand Galang, Greg Refraccion and Tonette Orejas, Inquirer Central Luzon