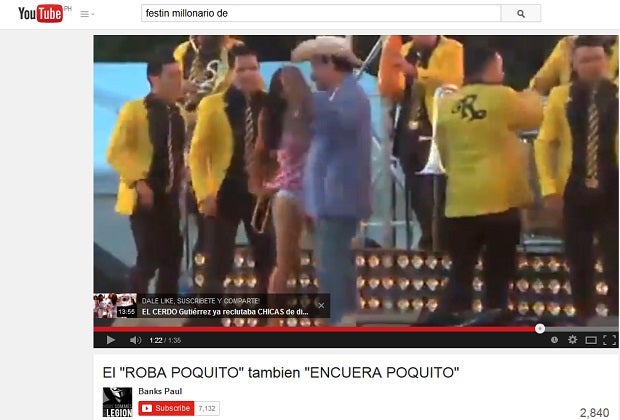 The woman dance partner of Mexican Mayor Hilario Ramirez struggles to pull down her dress after the local chief executive pulled it up during his 44th birthday party on Feb. 28, 2015. See video link below. YOUTUBE SCREENGRAB

MEXICO CITY, Mexico – A Mexican mayor who once said he stole “a little bit” from public funds sparked outrage again after lifting a woman’s dress while dancing on stage during his lavish 44th birthday bash.

Mayor Hilario Ramirez says he let himself be “moved by the emotion of the party” attended by 50,000 people in the Pacific coast state of Nayarit on Saturday.

In a video that has gone viral online, the mustachioed mayor is seen dancing closely with the woman and lifting her minidress, which she quickly brings back down, as a band plays on stage.

“When one is happy, and the women are happy, one doesn’t calculate. It’s not an excuse, but I do ask for forgiveness from my friend Rosita,” he told Milenio television late Tuesday, wearing a cowboy hat and a shirt with several open buttons, partly exposing his chest.

“Now that I see myself in the media, cabron (damn), it’s not good. I am sorry. I know it’s a great offense for women because I come from a woman, I have a mother, sisters, daughters,” he said.

Ramirez, however, said he did not regret holding the party in his hometown of Huaristemba. He is the mayor of San Blas, a 43,000-population town that elected him twice.

Asked about reports that the party cost 15 million pesos ($1 million), Ramirez said he did not know for sure but insisted that no public funds were spent.

Ramirez made headlines when he said during a 2014 campaign meeting that he had stolen “poquito” (a little bit) from public coffers.

He now says he was joking.

“If I were a thief, I wouldn’t have been elected mayor twice,” he said.

Congresswomen asked for sanctions and urged the finance ministry to investigate whether public funds were used for the party.

“This man dares to lift a woman’s dress twice to sexually abuse her. We won’t allow it. This man shouldn’t be mayor,” leftist deputy Martha Lucia Micher told Congress this week.

Ramirez, meanwhile, said he plans to redeem himself by organizing a new party for International Women’s Day on March 8.

“It’s a bash. You give presents. You dance, but with hands like this,” he said, holding both arms straight against his sides.