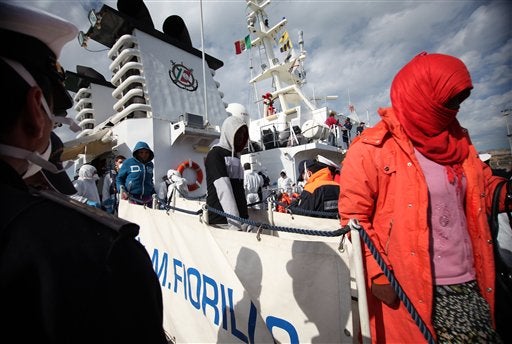 ROME — In a dramatic sea rescue north of Libya, a flotilla of rescue ships saved nearly 1,000 migrants and refugees, while 10 migrants perished in the southern Mediterranean, Italian officials said Wednesday.

The survivors were being ferried to southern Italian ports. The migrants had been aboard five motorized dinghies and two larger vessels. One of the larger boats capsized, and 10 bodies were spotted or plucked from the sea.

For months now, hundreds, and sometimes thousands, of migrants, fleeing conflicts or poverty have been reaching Italy practically weekly on smugglers’ boats setting sail from bases in Libya.

This year’s pace has seen a sharp uptick from 2014’s already staggering count of 170,000 migrants and asylum-seekers rescued at sea by Italy’s coast guard, navy and other vessels, including cargo boats pressed into humanitarian service.

According to Interior Ministry figures, 7,882 migrants arrived on Italian coasts in the first two months of this year, compared to 5,506 in that period in 2014.

The coast guard said the migrants saved in the latest rescues claimed to be Syrians, Palestinians, Libyans, Tunisians or from sub-Saharan Africa.

More than 30 children were among those rescued, and one of the 50 pregnant women aboard was urgently evacuated for medical reasons by a coast guard motorboat based at the tiny Italian island of Lampedusa.

One of the first alarms went out from a tug deployed at offshore oil platforms, and the tug also joined in the rescue operations about 50 miles (80 kilometers) north of Libya, the coast guard said.

For years, Italy has been appealing to the European Union to help with the rescues, with ships, aircraft or funding. It points out that most of those rescued intend to reach relatives or jobs in other European countries.

This year, an EU patrol mission known as Triton replaced Italy’s Mare Nostrum air and sea mission that had saved tens of thousands of lives. But Triton is more limited geographically, patrolling only EU countries’ waters, while the Italians had carried out rescues off Libya’s coast, where many of the unseaworthy, overcrowded vessels, founder.

The EU’s smaller-scaled mission is fodder for right-wing Italian politicians, including Matteo Salvini, the leader of the anti-immigrant, anti-Europe Northern League party. An Italian navy vessel detailed to Triton was among the rescue vessels Wednesday.

“Ten more dead and 900 clandestine migrants ready to disembark,” Salvini said Wednesday. “In Rome and in Brussels, there are full pockets and hands stained with blood.”

Government lawmakers also demanded the EU do more. Khalid Chaouki, from Premier Matteo Renzi’s Democratic Party lamented “this unexplainable European indifference that leads us to tally, yet again, victims of the Mediterranean.”

In Brussels, Migration Commissioner Dimitris Avramopoulos told reporters that the latest sea drama “reminds us once again that migration challenges will not just go away. Now more than ever we need a comprehensive and long-term strategy.” He spoke after a commission orientation debate on the EU’s new migration policy.

Italian officials have expressed concern that militants could mingle among migrants setting sail from Libya, where the Islamic State group has gained a foothold in that northern African country’s chaotic political and social situation.