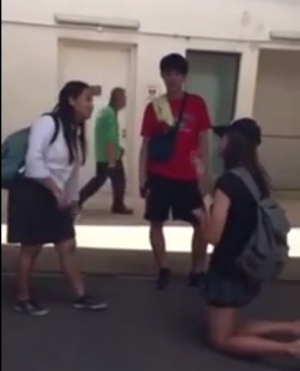 Screengrab of Youtube video showing a boy who cross-dressed as a female student to allegedly peep inside a girl’s restroom. In the video, he went down on his knees to apologize to the students.

SINGAPORE — A man was caught red-handed after allegedly dressing up as a girl to peep inside the toilet at ITE College West in Choa Chu Kang.

Twitter user Norrick Nolesta (@Noyyick) posted three photos of the incident at 1.23pm on Monday, with the caption: “This guy dressed as a girl went into my school girl’s toilet and tried to peep at my friend.”

This guy dressed as a girl went into my school girl’s toilet and tried to peep at my friendpic.twitter.com/r0DFhGrju9

A tall bespectacled man wearing a wig and dressed in a black T-shirt, short grey skirt and slippers could be seen being interrogated by a police officer.

He was also wearing a cap and carrying a blue backpack.

The photos were also posted on popular local forum Hardwarezone, where his actions were widely ridiculed by netizens.

In a video posted on Youtube the same day, angry students confronted the man, who later went down on his knees and seemed to be begging for forgiveness.