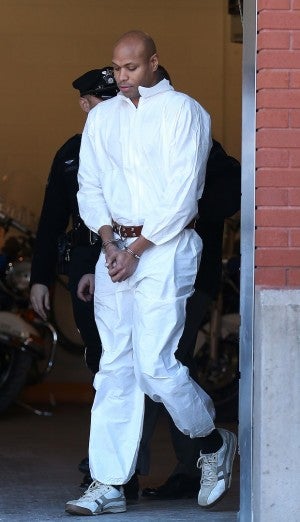 Radnor Township police lead Sean Moses out to a waiting police van in Radnor, Pa. on Monday, March 2, 2015. The suburban Philadelphia man sneaked around on his hands and knees and videotaped naked young women and girls in dressing rooms at one of the country’s largest malls and then posted the clips on online pornography websites, police said Monday. AP

WAYNE, Pennsylvania, United States — A man sneaking around on his hands and knees videotaped naked girls and women in dressing rooms at one of the largest U.S. malls and then posted the clips on pornography websites, police said Monday.

Surveillance video from the King of Prussia Mall outside Philadelphia shows Sean Moses, 37, reaching under doors to videotape women changing in dressing rooms at stores including Forever 21 and Express, police said.

Moses also sneaked up to suburban homes and videotaped nude or partially nude women and filmed a 2013 swim meet at Villanova University despite an order from the school to stay away after an unspecified 2002 campus incident, police said.

Police arrested Moses on Monday at the Penn Valley home where he lives with a woman and his 6-year-old daughter and charged him with 86 counts of invasion of privacy and one count of child pornography.

Moses was arraigned Monday afternoon and jailed in lieu of $500,000 bail. He did not have a lawyer. A preliminary hearing is scheduled for March 12.

Detectives called it one of the largest invasion-of-privacy cases they’ve seen in the area. They said Moses kept a “jail bait” folder on his computer with videos of girls who appeared to be under 18.

Police have worked to scrub his videos from the Internet, but Colarulo says, “He had such a following on the Internet that his fans would repost his videos as him.”

Police said they started investigating allegations of video voyeurism against Moses in September, when two young women reported seeing a light in their window that turned out to be a camera.

Police said they found a video Moses uploaded of the women labeled “Amazing Brunette and roommate who noticed peep” and included as a description: “When you get caught out of position you ruin what could have been an awesome semester in voyeurism 101.”

Colarulo says he believes there are more victims and urged them to come forward.