A year after bus crash, a crusade for road safety 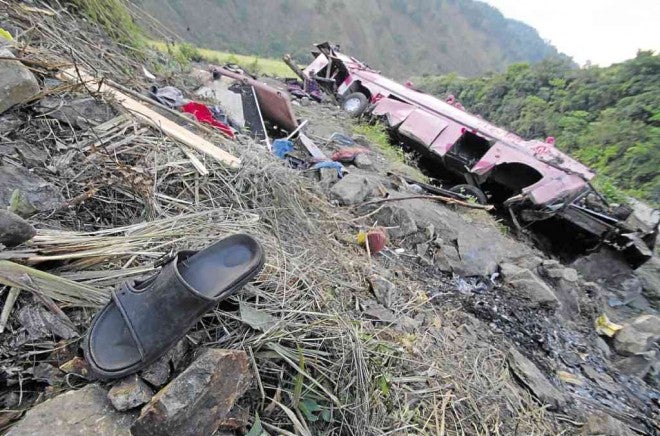 THE DEBRIS illustrate the impact suffered by the passengers of the ill-fated GV Florida bus which plunged on Feb. 7, 2014, in Barangay Talubin in Bontoc, Mountain Province. Fifteen people died in the accident. RICHARD BALONGLONG/INQUIRER NORTHERN LUZON

BAYOMBONG, Nueva Vizcaya —A year has passed since a GV Florida bus crashed in Bontoc, Mountain Province, but for the families of the 15 passengers who died in the accident, as well as the survivors, their search for justice is still a long and arduous journey ahead.

The tragedy has since become a rallying point for road safety that the victims, their families, and advocates push for reforms in the public transport industry.

On Feb. 7, the first anniversary of the bus crash that also injured at least 30 others, the group

“The cornerstone of this campaign is the ‘Para Po!’ reporting tool, which empowers commuters to report whether the operators of the buses have complied with existing rules and regulations, [or violations such as] smoke belching, lack of visible plates, reckless driving, obstruction of traffic and overloading,” said Micheline Rama, creative and strategy director of Dakila.

Initially, the online tool, which can be accessed at www.parasapilipinas.ph, will be used to monitor public utility buses operating in Metro Manila and the provinces, Rama said. This will soon cover other forms of land transportation, she said.

“More than just a complaint mechanism, it can also monitor compliance and identify exemplary bus lines. As reports come in, we’ll also be able to track the performance of bus operators and share information back to the public,” Rama said.

With better information, “Para Po!” will allow passengers to choose bus companies based on track record, avoiding those with negative reviews.

The campaign takes its cue from the results of the investigation on the Bontoc bus tragedy, where the Land Transportation Franchising and Regulatory Board (LTFRB) concluded that the GV Florida operated the Manila-Bontoc line illegally.

The bus, the LTFRB said, had switched license plates with another bus belonging to Cable Tours, a licensed bus operator, to make it appear that it was permitted to ply the route—a practice known in the bus transport industry as the “kabit” system.

The agency had meted GV Florida a six-month suspension of operations of its 200 buses plying the Metro Manila to the Ilocos, Cagayan Valley and Cordillera routes.

In July last year, five months after the suspension order, the Court of Appeals modified the LTFRB ruling by affirming the cancellation of the bus firm’s franchise for the Bontoc route but lifting the ban on its operations in other destinations.

GV Florida’s return was like another wound inflicted on survivors like tattoo artist Trina de Leon, 31, who said the bus company neglected their needs after the accident.

De Leon said she had not received any aid from GV Florida for her injuries in the two months that she was unable to walk. Owners or their representatives had not reached out to her for help, she said.

De Leon, who suffered pelvic and leg injuries, said her hospital bills were shouldered by the Bontoc mayor, while expenses for the ambulance that transferred her to another hospital in Cabuyao town in Laguna province, and all other related expenses, were paid for by her relatives.

“I tried contacting the phone numbers posted on their website but I never got any response,” she said.

Charito Baranda, 49, wife of Marshall Baranda Jr., who was among those killed in the crash, said she never heard from the bus company.

“All I got was the check for P150,000 from GV Florida and the insurance firm [as death benefit]. Other than that, nothing. No phone call, no note, not even a text message,” she said.

Since her husband’s death, she now has to raise her four children alone and support them through college.

She said many lives were shattered in the Feb. 7 tragedy because of the apparent negligence of bus companies and the agencies tasked to check on them.

“Our group’s stand is for owners to make sure that their buses are in good condition and to subject their drivers to more intensive training, and for the LTFRB to do its job,” she said.

In a phone interview, Virgilio Florida Jr., vice president of GV Florida, said the company was able to provide for the needs of the victims by giving them cash assistance and paying the medical expenses of those injured.

He said the crash was not caused by a mechanical defect on the bus.

“Even in the pronouncement of the court, it was reiterated there that no evidence was presented that would bolster speculations that faulty brakes led to the crash,” he said, citing a ruling on the homicide case filed against Edgar Renon, the driver.

Florida said the company continued to maintain a high level of standard in professionalizing their drivers and in the roadworthiness of their buses.

“We keep on telling our drivers to always bear in mind that they should not take chances because the lives of their passengers depend on them,” he said.

Aside from the launching of the campaign, Dakila ran a series of activities to commemorate the event, including a Mass near the crash site in Talubin, Bontoc, on Feb. 8.

“While we continue to mourn for our loss, we still seek for justice. Until today, the criminal case has not moved forward and some families still have not been given compensation due to them,” it said in a statement.

A year after Florida bus crash, driver under court custody