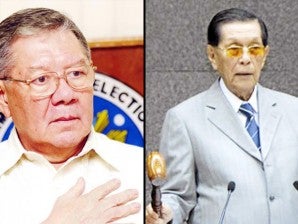 The Senate and the House of Representatives on Thursday agreed in principle to adopt a bicameral constituent assembly as a mode of amending certain economic provisions in the Constitution.

At a joint press conference by leaders of the Senate and the House at the close of their legislative summit in Pasig City, Senator Franklin Drilon said both Senate President Juan Ponce Enrile and Speaker Feliciano Belmonte had concurred with his proposal to have both chambers vote separately on bills involving Charter change (Cha-cha).

However, Budget Secretary Florencio Abad told reporters that President Benigno Aquino III was sticking to his position that constitutional amendments were not a priority of his administration.

Drilon noted various attempts in the past to amend the Constitution but these did not prosper due to fears that calling for a constituent assembly and constitutional convention, two of the three modes of amending the Charter, would open the entire document to amendments. The third mode is a people’s initiative.

A member of President Aquino’s Liberal Party, Drilon said the Senate recognized the apprehensions of the various sectors of society that an amendment could allow parochial interest to set in because of the question of joint or separate voting.

Drilon, however, said that in the constituent assembly, each legislator would have one vote. In this case, the House, because of its bigger number of members, would have its way and senators fear such a situation would not be conducive to check and balance.

“We will use the legislative process and lawmaking procedure in amending the Constitution, then on that point, we will be exercising constituent function through a bicameral assembly consistent with a bicameral legislature,” he said.

Drilon said that even constitutionalist-legislators like Northern Samar Representative Raul Daza and Cebu Representative Pablo Garcia agreed that this could be done.

Under this process, each senator or congressman would be free to propose an amendment just like in any legislation which would be taken up in committee hearings or the committee of the whole and will only touch on economic provisions, not structure or term limits.

Drilon said a committee had been formed composed of the majority leaders of both houses—Senator Vicente Sotto III and Representative Raul Gonzales II, along with the Senate finance committee and the House appropriations committee chairs—to push the idea further and submit a definite proposal on how to go about Cha-cha in the next summit.

He also assured the people that any proposed amendment to the Constitution would be thoroughly debated by both houses at committee hearings for transparency.

“This is a proposal that will be on the table and leaders of both Houses agreed this will be a good start, before submitting these to the people for ratification,” Drilon said.

Belmonte said that measures seeking to amend the Constitution would be treated as ordinary bills. For Gonzales, the two chambers of Congress voting separately could provide a more positive outlook on the matter.

Enrile said Congress did not involve the President at this time because the matter was purely an initiative of the legislature.

“Eventually, the President will have to come into play because we operate as a wholistic government. I’d like to emphasize the fact that we are opening the discussion on the possibility of amending the economic provisions of the Constitution,” the Senate President said.

He said the Senate would not rush discussions on Charter change because this involves the life of the nation and the interest of the people.

During the closed-door summit, Belmonte said both chambers identified 26 possible joint priority measures, including the General Appropriations Act of 2012, that may be adopted until the end of the year.

The Speaker said the number did not include any of the Legislative Executive Development Advisory Council’s priority measures with counterpart bills in both houses that may also be approved during the same period.

Gonzales said he was surprised to learn that both Houses had identified only three similar priority bills, namely the proposed Cybercrime Act, proposed Lowering the Age of Criminal Responsibility of Minor Law and amendments to the Bangko Sentral ng Pilipinas charter.

He said the House had transmitted 11 approved bills for Senate action while the Senate had also sent a similar number of bills for House approval.

Belmonte said both chambers also decided to put together joint priority bills, including the 34 proposed bills in legislative-executive council.

“The main purpose here is to have a mechanism by which things that we already agreed on can be fast-tracked and approved by the two chambers,” the Speaker said.

Enrile said that the summit, initiated by the House and with concurrence of the Senate, was not meant to supplant what had been discussed in the council.

“What we have done today (How the process should proceed and the way to govern it) is simply to supplement the effort of the executive in line with our principle of coordination with the two other branches of government,” Enrile said.

He described the discussion at the summit as “very open, transparent and candid” and was made in recognition of the country’s need to really address the problems and to find a way to hasten their solution and move the country forward. With a report from Norman Bordadora