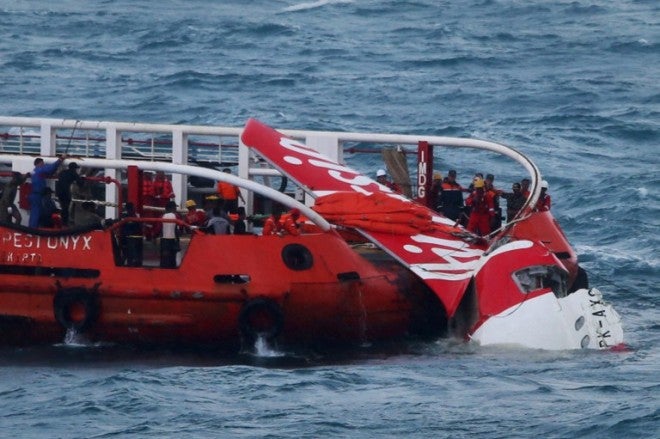 In this Jan. 10, 2015, file photo, an Indonesian search and rescue ship recovers the tail wreckage of AirAsia flight QZ8501 from the seabed south of Borneo island. AFP

JAKARTA, Indonesia—Indonesia has retrieved the final major part of the fuselage of an AirAsia jet that crashed into the Java Sea in December, killing all 162 people on board, officials said on Saturday.

The mangled wreckage, the largest part of the plane retrieved, was pulled from the sea on Friday and loaded onto a ship, national search and rescue chief Bambang Soelistyo said.

“We have retrieved on Friday the last and large part of the AirAsia fuselage with a wing still intact,” Soelistyo told AFP.

No bodies were found during the course of the operation.

Soelistyo said in a press conference on Saturday that authorities would decide on a final date for the salvage operation after a meeting with the victims’ families scheduled for next week.

Some 103 bodies have been recovered since the plane went down in stormy weather while flying from the Indonesian city of Surabaya to Singapore, search and rescue coordinator S.B. Supriyadi told AFP.