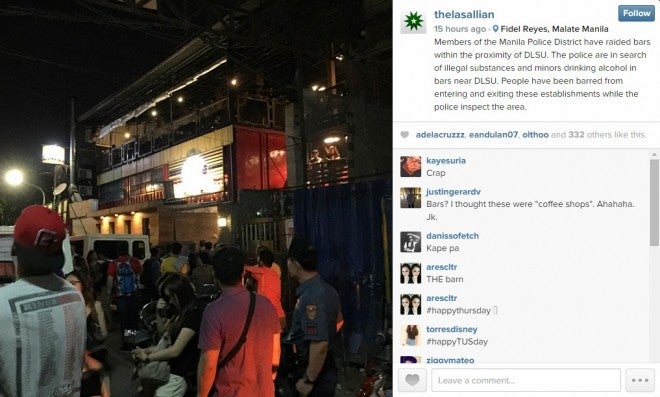 Members of the Manila Police District raid an establishment near De La Salle University and College of St. Benilde. Screengrab from The La Sallian’s Instagram account

MANILA, Philippines–No illegal drugs were seized in the Thursday raid in Manila that led to the apprehension of over 20 minors in a strip of bars near De La Salle University (DLSU) and College of Saint Benilde (CSB) on Taft Avenue.

At least 27 minors were put under the custody of the Manila Police District after the police, with the Department of Social Welfare and Development and the inter-agency council against trafficking of the Department of Justice raided three resto-bars late Thursday.

In a phone interview with INQUIRER.net, MPD spokesperson Superintendent Marissa Bruno said the operation stemmed from complaints that The Barn, Beach and Plato bars sold liquors to minors without permit.

Bruno said the operation was also founded on the reports the Bureau of Permits and the DSWD received that minors have been frequenting the said bars that illegally sold alcoholic drinks.

The raid came amid reports that drug transactions have been allegedly occurring at the The Barn, Beach and Plato bars, where pushers sell Valium and marijuana to students.

However, Bruno said the MPD found no illegal substance from the arrested minors.

“We only found that these establishments are violating permit policies,” she said.

Police also recommended closure of the said bars while the possible charges against the owners are still being identified.

On Thursday night around 11 p.m., The LaSallian, the official publication of DLSU, said the minors have been detained at the Crimes Against Persons Investigation Section of the Manila Police District.

But it also clarified that majority of arrested minors are not students of DLSU nor CSB. This was confirmed by Bruno, saying only 1 out of 27 is a student of La Salle.

When the police started inspecting the area, The La Sallian said the minors were prevented from leaving as the MPD closed establishment doors for the inspection.

As of Thursday morning, Bruno said all apprehended minors have been fetched by their parents and guardians at the MPD headquarters along UN Avenue in Manila.