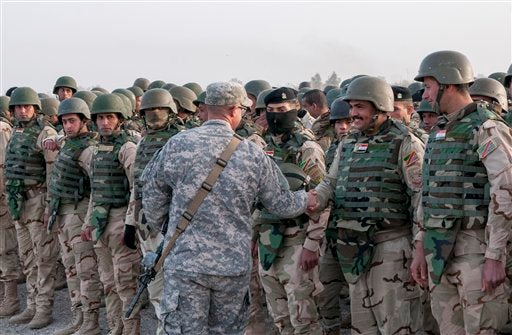 In this Feb. 13, 2015 file photo released by the U.S. Army, Staff Sgt. Kody Cross, center, from the 1st Infantry Division and a Letcher, S.D., native, congratulates Iraqi army trainees on their graduation from a six-week training course at Camp Taji, north of Baghdad, Iraq. AP

BAGHDAD— The Islamic State group released a video on Thursday showing militants using sledgehammers to smash ancient artifacts in Iraq’s northern city of Mosul, describing the relics as idols that must be removed.

The destructions are part of a campaign by the IS extremists who have destroyed a number of shrines — including Muslim holy sites — in order to eliminate what they view as heresy. They are also believed to have sold ancient artifacts on the black market in order to finance their bloody campaign across the region.

The five-minute video shows a group of bearded men inside the Mosul Museum using hammers and drills to destroy several large statues, which are then shown chipped and in pieces. The video then shows a black-clad man at a nearby archaeological site inside Mosul, drilling through and destroying a winged-bull Assyrian protective deity that dates back to the 7th century B.C.

In New York, U.N. spokesman Stephane Dujarric said the U.N.’s cultural agency, UNESCO, is examining the video. “The destruction of cultural heritage is reprehensible and criminal,” Dujarric said, adding that it robs current and future generations of the history of their past.

The video was posted on social media accounts affiliated with the Islamic State group and though it could not be independently verified it appeared authentic, based on AP’s knowledge of the Mosul Museum.

Mosul, Iraq’s second-largest city and the surrounding Nineveh province fell to the militants during their blitz last June after Iraqi security forces melted away.

In their push, the extremists captured large swaths of land in both Iraq and neighboring Syria, declared a self-styled caliphate on territories that are under their control, killing members of religious minorities, driving others from their homes, enslaving women and destroying houses of worship.

The region under IS control in Iraq has nearly 1,800 of Iraq’s 12,000 registered archaeological sites and the militants appear to be out to cleanse it of any non-Islamic ideas, including library books, archaeological relics, and even Islamic sites considered idolatrous.

“Oh Muslims, these artifacts that are behind me were idols and gods worshipped by people who lived centuries ago instead of Allah,” a bearded man tells the camera as he stands in front of the partially demolished winged-bull.

“The so-called Assyrians and Akkadians and others looked to gods for war, agriculture and rain to whom they offered sacrifices,” he added, referring to groups that that left their mark on Mesopotamia for more than 5,000 years in what is now Iraq, eastern Syria and southern Turkey.

“Our prophet ordered us to remove all these statues as his followers did when they conquered nations,” the man in the video adds. The video bore the logo of the IS group’s media arm and was posted on a Twitter account used by the group.

A professor at the Archaeology College in Mosul confirmed to the Associated Press that the two sites depicted in the video are the city museum and a site known as Nirgal Gate, one of several gates to the capital of the Assyrian Empire, Ninevah.

“I’m totally shocked,” Amir al-Jumaili told the AP over the phone from outside of Mosul. “It’s a catastrophe. With the destruction of these artifacts, we can no longer be proud of Mosul’s civilization.”

He said that very few of the museum pieces are not genuine.

Among the most important sites under the militants’ control are four ancient cities — Ninevah, Kalhu, Dur Sharrukin and Ashur — which were at different times the capital of the mighty Assyrian Empire.

The Assyrians first arose around 2500 B.C. and at one point ruled over a realm stretching from the Mediterranean coast to what is present-day Iran. Also in danger is the UNESCO World Heritage Site Hatra, which is thought to have been built in the 3rd or 2nd century B.C. by the Seleucid Empire. It flourished during the 1st and 2nd centuries as a religious and trading center.

UNESCO’s director general said she was “deeply shocked” at the footage showing the destruction and has asked the president of the U.N. Security Council to convene an emergency meeting “on the protection of Iraq’s cultural heritage as an integral element for the country’s security.”

“I condemn this as a deliberate attack against Iraq’s millennial history and culture, and as an inflammatory incitement to violence and hatred,” Irina Bokova said.

She added that large statues from the UNESCO World Heritage site of Hatra and “unique artifacts” from archaeological sites in the Ninevah governorate, among many other pieces, have been destroyed or defaced.

The damage to Iraqi artifacts in Mosul is the latest episode in incidents that have targeted the nation’s heritage.

In January, Islamic State militants ransacked the Central Library of Mosul, smashing the locks and taking around 2,000 books — leaving only Islamic texts. Days later, militants broke into University of Mosul’s library. They made a bonfire out of hundreds of books on science and culture, destroying them in front of students.

The day after Baghdad fell to U.S. troops in April 2003, looters burst into the Iraqi National Museum in the Iraqi capital, making off with scores of priceless artifacts and leaving the floor littered with shattered pottery. The U.S. was widely criticized at the time for failing to protect the site.