US, NATO troops parade near Russian border in Estonia 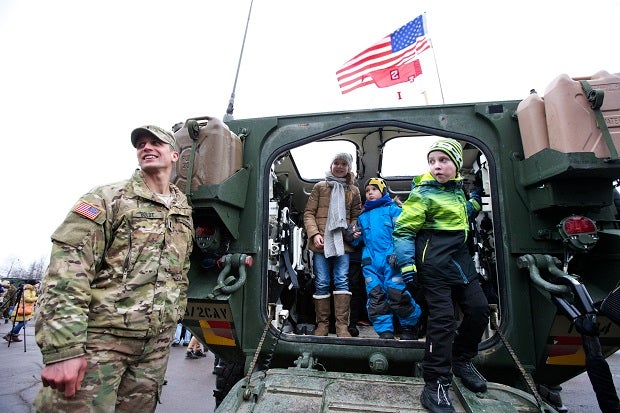 U.S. soldiers from the NATO contingent participate in a parade in Narva, Estonia, Tuesday, Feb. 24, 2015. Troops and vehicles from U.S. and NATO regiments took part in the military parade to mark Estonias Independence Day near the Russian border, in the first known official appearance of the forces so close to the former Cold War enemy. AP

TALLINN, Estonia — Troops and vehicles from U.S. and NATO regiments have taken part in a military parade during Estonia’s Independence Day near the Russian border, in the first known official appearance of the forces so close to the former Cold War enemy.

Some 1,400 Estonian and multinational troops participated in the Tuesday parade in the eastern border town of Narva, separated from Russia by a narrow river. The annual independence parade is rotated between various Estonian towns.

It was the first time that American soldiers — based in the Baltic nations of Estonia, Latvia and Lithuania — have paraded so close to the Russian border.

Estonia’s military said Wednesday the usual flyovers by NATO fighters during such parades were not held because international regulations forbid military flights near international borders.

Kerry: Russia has lied about its activities in Ukraine

US troops heading to Ukraine to give medical training