Kerry: Russia has lied about its activities in Ukraine 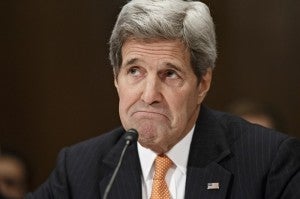 Secretary of State John Kerry testifies on Capitol Hill in Washington, Tuesday, Feb. 24, 2015, before a Senate Appropriations subcommittee to defend the budget requests for America’s diplomacy operations. When asked about Ukraine, Kerry said Russia has lied to my face and the face of others on many different occasions about its activities in Ukraine. He added that Russia is engaged in the biggest propaganda exercise that hes seen since the height of the Cold War. AP

WASHINGTON, United States — Secretary of State John Kerry said Tuesday that Russia has repeatedly lied to him about its activities in Ukraine where pro-Russian rebels are fighting national forces.

“Russia is engaged in a rather remarkable period of the most overt and extensive propaganda exercise that I’ve seen since the very height of the Cold War,” Kerry told a U.S. Senate Appropriations subcommittee. “And they have been persisting in their misrepresentations — lies — whatever you want to call them about their activities there to my face, to the face of others on many different occasions.”

Russian President Vladimir Putin denies arming rebels in the war in eastern Ukraine, which has killed more than 5,600 people and forced over a million to flee their homes. The fighting began in April, a month after Russia annexed the mostly Russian-speaking Crimean Peninsula.

U.S. lawmakers from both the Democratic and Republican parties are strongly urging the Obama administration to provide Ukraine with lethal weapons to defend themselves against anti-government rebels backed by Russia. Many European governments, however, oppose any U.S. move to provide military support for Ukraine’s government, fearing that might spark a wider proxy war.

Kerry declined to disclose his opinions about arming Ukrainian forces, saying such assistance was still under discussion among members of the Obama administration and the U.S. Congress.

He stressed that Congress also needs to be willing to provide adequate economic assistance to Ukraine.

US troops heading to Ukraine to give medical training