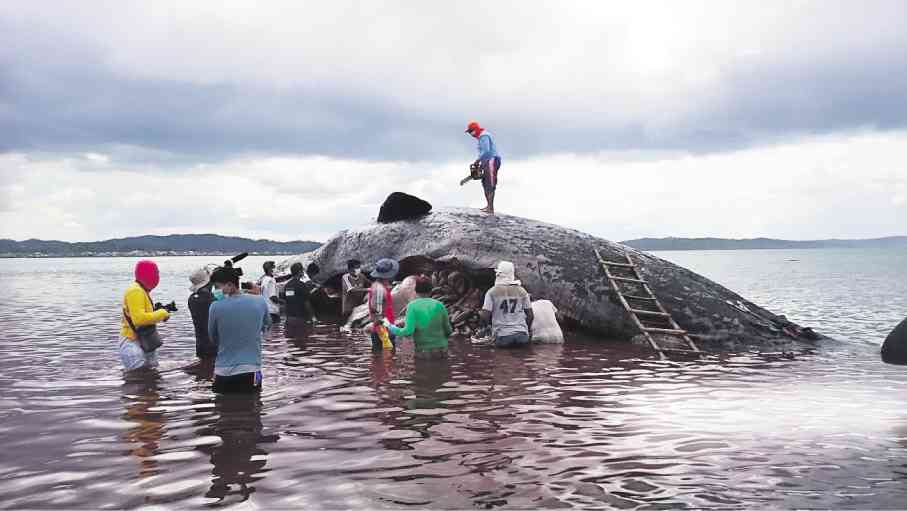 FISHERY experts and workers had to use a ladder to reach parts of the sperm whale that was stranded and died in Lamon Bay in a vain search for food. PHOTO COURTESY OF BUREAU OF FISHERIES AND AQUATIC RESOURCES (BFAR)-CALABARZON

LUCENA CITY—Hunger could be the cause of death of a sperm whale that had been stranded in waters of Calauag town in Quezon province and environmentalists are linking the case to illegal and overfishing in the area.

The area where the whale was found, Lamon Bay, is a rich fishing ground, said Glenn Forbes, officer in charge of the environmental group Tanggol Kalikasan-Southern Tagalog. “But the whale died because of illegal fishing and overfishing,” said Forbes, citing results of a necropsy conducted on the whale.

Experts from the Bureau of Fisheries and Aquatic Resources (BFAR) conducted the necropsy.

Caguicla, while saying results of the necropsy would still be subjected to further evaluation, said the whale that was stranded in shallow parts of Lamon Bay on Feb. 17 was in desperate search for food.

“That was the initial assessment after the necropsy,” said Caguicla in a phone interview. The whale died on Feb. 18.

Forbes assailed the continued use of illegal fishing implements in

Buli-buli is a fishing gear consisting of a conical net with a pair of “wings” connected to a rope embedded with “buri,” plastic strips and sinkers. It is hauled through a mechanical winch or manually.

BFAR, since 2013, has banned the use of buli-buli because its use

Caguicla described the whale, which weighed from 40 to 50 tons, as one of the biggest ever to be seen in the country. It was 55.7 feet long or nearly the length of a bus.

She said the wound on the right side of the whale, which was caused by shark bites, was only superficial and did not cause its death.

The regional office of BFAR, in a report on its Facebook page on Feb. 20, said the whale, which BFAR christened as “Cally,” was extremely weak when found. It had minor abrasions and its skin was peeling off.

Its blowhole emitted a foul smell and strong sound, which are signs that the whale had been fighting for its life, said the report.