Peping Cojuangco: I am for Jejomar Binay 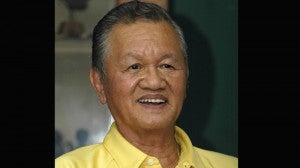 Asked during the program’s “Yes or No” segment if he would support Binay in the 2016 polls, Cojuangco said “Yes.”

However, the President’s uncle said that while he was calling for the ouster of Aquino, he did not think that Binay should take over the presidency.

Cojuangco denied allegations that he was “bitter” towards his nephew for not appointing him to a higher position in the government.

“I have my own things to do. I am now involved in sports. I am the president of the Olympics Committee. Hindi naman ako nabubuhay sa politika (I do not live for politics),” he said.

Ironically, many observers say Philippine sports have sunk to its lowest levels during Cojuangco’s leadership, noting the poor performance of Filipino athletes in recent regional and international sports competitions.

Cojuangco said he was urging the president to resign as a duty to the Filipino people.