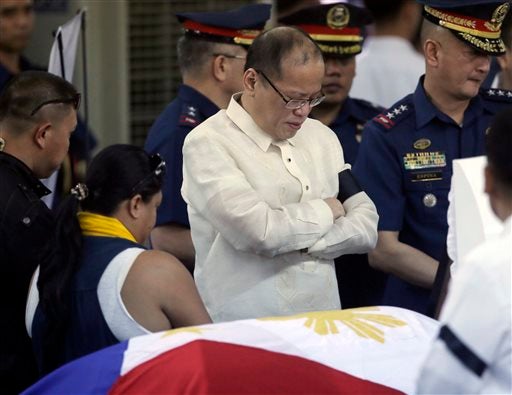 This was a complete turn-around of the President’s sentiment about Purisima, who he even commended in his earlier speech when he announced Purisima’s resignation as police chief amid allegations that he called the shots in the botched anti-terror raid.

In a press conference, Cagayan De Oro Representative Rufus Rodriguez revealed the details of their Monday meeting with the President, who urged the lawmakers to regain their support for the Bangsamoro basic bill (BBL) despite the MILF’s involvement in the slaughter of 44 Special Action Force (SAF) cops.

But this reinforcement was only deployed around 8:20 a.m., as opposed to Purisima’s text message around 8:17 a.m. that the support had already been given.

Purisima said he only based his text message on Western Command chief Lt. Gen. Rustico Guerrero, but the latter said he only meant the tank and artillery were in place but not yet deployed.

Because of Purisima’s text messages, Aquino was led to believe that the operation was going as planned. It was at this point that Aquino felt he was lied to, Rodriguez said.

“Based on the texts shown to us… Purisima told the President that the mechanized brigade and artillery of the armed forces are already supporting the SAF, which is wrong,” Rodriguez said.

“The president felt he was lied to. That was his quote,” added the lawmaker who chairs the ad hoc committee tackling the BBL.

Aquino also felt “betrayed” by sacked Special Action Force (SAF) commander Getulio Napenas who failed to comply with his order to coordinate with the police and the military about the operation.

“He felt betrayed by Napenas because they disobeyed the order. The days before the incident were for Napenas to coordinate with the armed forces and the police units,” Rodriguez said.

The same statement from Aquino was confirmed by Minority Leader Ronaldo Zamora, also present in the meeting.

Zamora said Aquino was asked if he was misled to thinking that the operation meant to take down Malaysian international terrorist Zulkifli bin Hir and his local deputy Abdul Basit Usman was winding down.

“I still remember the word (the President used): ‘I had been lied to,’” he added.