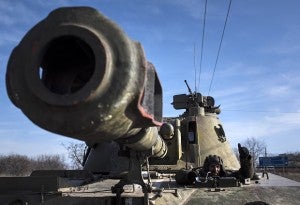 Continued hostilities meant a pull-back of heavy weapons could not go ahead as agreed, Ukrainian officials said.

“As Ukrainian positions are still being fired upon there can be no talk yet of a withdrawal of arms,” military spokesman Vladyslav Seleznyov wrote in a statement on Facebook on Monday.

Tensions were also high following a bomb blast Sunday in the normally peaceful eastern city of Kharkiv. In their latest toll, authorities said that three people had died in the “terrorist” attack.

Ukraine’s currency, the hryvnia, plummeted some 10 percent on Monday because of the instability.

The West has warned of additional sanctions on Russia should the shaky truce deteriorate further, especially after rebels captured the strategic town of Debaltseve last week in defiance of the ceasefire slated to start February 15.

The Organization for Security and Cooperation in Europe, tasked with monitoring the truce, “concludes that the ceasefire is not holding in critical, strategic points,” including near Mariupol and in Debaltseve, the deputy head of the OSCE mission, Alexander Hug, told France 24 television. 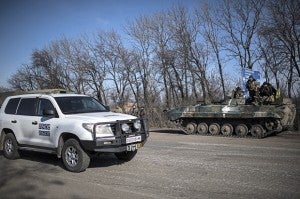 A meeting of the foreign ministers of Ukraine, Russia, Germany and France was scheduled to take place in Paris on Tuesday to discuss the truce’s implementation.

However a source in the Ukrainian foreign ministry raised doubt, saying Ukrainian Foreign Minister Pavlo Klimkin “intends to go to the meeting tomorrow (Tuesday) but the situation might change.”

A Ukrainian military commander, Colonel Valentyn Fedichev, said Monday that, while the number of attacks had generally decreased across the conflict zone, troop positions were still fired upon 27 times since Sunday. Two Ukrainian soldiers were killed and 10 wounded, he said.

Insurgent fighters “have not halted attempts to assault our positions in the town of Shyrokine and the Mariupol area,” Fedichev said.

Other defense officials said the rebels fired mortars into Shyrokine, which neighbors Mariupol, in an apparent attempt to provoke troops into firing back in violation of the ceasefire.

Kiev has alleged Russia sent 20 tanks towards Mariupol, a port city of half a million residents on the Azov Sea coast, and that two tank attacks occurred there on Sunday.

Moscow denies giving military support to the rebels. However it made the same denials over Crimea — the Ukrainian Black Sea peninsula that it annexed last year — before finally admitting that it had deployed troops.

If Mariupol were to fall to the pro-Russian rebels, it would remove a key obstacle to creating a separatist land corridor stretching from Russia’s border with Ukraine to Crimea.

The United States and the European Union, however, have strongly warned against further breaches of the ceasefire, with Washington saying extra sanctions could be imposed on Russia within days.

“An advance on Mariupol would clearly be in breach of the agreements” underpinning the truce brokered by Berlin and Paris, German Foreign Minister Frank-Walter Steinmeier said in an interview with his country’s Bild newspaper.

Germany government spokesman Steffen Seibert said: “It fills us with concern that there is still no comprehensive truce.”

Germany and France brokered the truce this month in the Belarus capital Minsk, and it was subsequently endorsed by the UN Security Council.

Up to now, the main compliance with the Minsk agreement has been a prisoner swap conducted on Saturday in which nearly 200 captured fighters from both sides were traded.

British Foreign Secretary Philip Hammond said during a visit to Estonia that, “from the experience of the last 10 to 12 days, the Russian engagement in the Minsk (truce) process is rather cynical.”

He expressed a “high degree of scepticism about a Russian commitment to achieving genuine peace in Ukraine on anything but terms unilaterally dictated from the Kremlin.”

Russia has already been hit by successive rounds of Western sanctions that are savaging its economy, which is headed for recession because of a collapse in oil prices.

Russian President Vladimir Putin told Russian state television that, “if the Minsk accords are complied with, then I am sure that the situation will gradually get back to normal.”

He added: “No-one needs a conflict, moreover an armed one, on the periphery of Europe.”