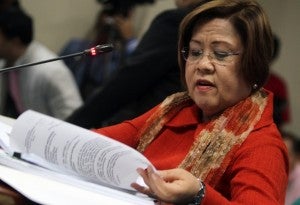 MANILA, Philippines–A Catholic bishop on Monday dared the Department of Justice to file criminal charges against the Church-based National Transformation Council (NTC) if the multi-faith and civil society group was committing illegal acts in calling for the resignation of President Aquino.

Lipa Archbishop Ramon Arguelles said the NTC would not object to any legal action the DOJ may take against members of the group as he insisted they were merely “patriots defending the country, the Constitution and the people.”

“If they are truly following the law, then they apply the law,” Arguelles told reporters, reacting to a statement made by Justice Secretary Leila de Lima on Sunday.

De Lima said the council was courting criminal charges for provoking a military-backed uprising against the government. She said NTC’s activities could be “contemplated as conspiracies relating to sedition, rebellion or coup d’etat.”

In a statement directed at the NTC, De Lima said that by calling for “people power” and military support to force the President’s “resignation” in order to pave the way for a junta, “the NTC and its mushrooming allied alphabet soup organizations of discredited government officials consisting of charged plunderers, grafters and tax evaders, or of those under investigation for such crimes, may have just crossed the line of legitimate dissent.”

“A junta by any other sanitized name is still illegal and unconstitutional. The government will not relent in applying the full force of the law against them in order to protect the people and the State from an unconstitutional and illegal power grab,” she said.

The NTC, which was launched last year in Batangas and Cebu, is composed of leaders of the Catholic Church and Christian denominations as well as civil society groups and other prominent personalities, including former National Security Adviser Norberto Gonzales.

Arguelles yesterday maintained the movement’s actions were not outside the law. “We in the NTC are not doing anything illegal. We are patriots defending our country, our Constitution and our people.”

But President Aquino’s allies in the House of Representatives yesterday belittled efforts to stage another people power revolt to force him to step down.