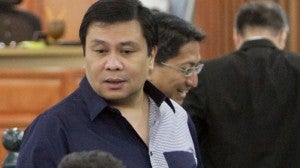 The Sandiganbayan on Monday issued a writ of attachment for detained Sen. Jinggoy Estrada’s assets valued at nearly P184 million. The writ bars the senator or his representatives from selling properties registered in his name or of his immediate family members.

Also covered by the writ were shares of stock in 10 companies worth some P16 million and registered in the name of Estrada, his wife Ma. Presentacion and their daughter Janella Marie.

In granting the prosecution’s petition to freeze his assets, the antigraft court’s Fifth Division cited a report by the Anti-Money Laundering Council (AMLC). The report said that Estrada closed four accounts containing P76.4 million in September 2013 after the controversy on the P10-billion pork barrel scam came out in the media.

The court also considered the testimony of primary whistle-blower Benhur Luy, who accused Estrada of receiving “rebates” or kickbacks from Janet Lim-Napoles, the suspected architect of the P10-billion scam.

“(A) sufficient cause of action exists against accused Estrada based principally on the evidence presented by Benhur Luy and the results of the investigation conducted by the AMLC which show, prima facie, that accused Estrada received commissions, kickbacks and/or bribes,” the court said in granting the writ, which is similar to a freeze order issued by trial courts.

No leg to stand on

But Estrada maintained that the prosecution’s motion “has no legal leg to stand on,” saying the reasons stated under the Rules of Court for granting such a legal remedy were “not present in this case.”

He assailed the Office of the Ombudsman for “relying heavily” on evidence provided by Luy which, he said, were merely “hearsay, based on speculations and which come from a polluted source being a confessed forger and principal by indispensable participation.”

“It is undisputed that the funds in question were never placed in [my[ possession or custody. Under the circumstances, [I] cannot be deemed an ‘accountable officer’ of the subject funds,” Estrada said, referring to his Priority Development Assistance Fund (PDAF) or pork barrel allotments.

“Hence, [I] cannot be held liable for embezzlement or misappropriation of funds, which [I] was never in custody or possession of, and for which, [I am] not considered accountable by law,” he added.

Estrada said his role in the disbursement of his PDAF was merely recommendatory and he had no hand in implementing the projects it supported.

He also argued that he did not try to conceal or dispose of his properties and that he had no plans to do so. He noted that the results of the AMLC inquiry into his bank accounts “only show that his assets are intact and have not been concealed or removed.”

But the court said the government prosecutors were right in insisting that the State was entitled to such provisional remedy as stated under Rule 127 of the Revised Rules of Criminal Procedure.

It said the writ was intended to “secure the preservation of these unexplained wealth and income should no petition for civil forfeiture or freeze order be filed.”