The call to non-violence, heroism, greatness 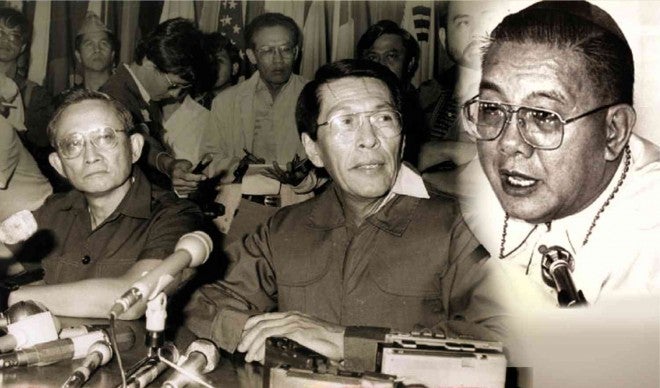 BREAKAWAY Twenty-nine years ago, then Armed Forces Vice Chief of Staff and Integrated National Police Chief Lt. Gen. Fidel V. Ramos and Defense Secretary Juan Ponce Enrile announced their withdrawal of support for the Marcos dictatorship, while Manila Archbishop Jaime Cardinal Sin called for people to go to Edsa where the military and police camps are located to protect the so-called rebel soldiers after getting a nervous call for help from Enrile. Thus was born the peaceful Edsa People Power Revolt that startled the world and became its regime-changing model wherever people yearned to be free. COMPOSITE PHOTO FROM THE BOOK “CHRONOLOGY OF A REVOLUTION”

Filipinos all over the country were practically glued to Radio Veritas, which was the only radio station that dared to give a blow-by-blow account of the unfolding siege at Edsa in February 1986.

In fact, the whole world tuned in stunned as it heard and watched what was happening in Manila during those four unforgettable days in February 1986. It began on Feb. 22.

Below is a transcription of the voice clips of the late Manila Archbishop Jaime Cardinal Sin and Armed Forces Vice Chief of Staff Fidel Ramos, now considered heroes of Edsa, as they made their appeals to soldiers and policemen over Radio Veritas.

FIDEL RAMOS, chief of the Integrated National Police. The following are excerpts from statements/answers to questions during the historic press conference at Camp Aguinaldo on Feb. 22, 1986, 6:45 p.m. that started it all.

We are withdrawing our support for Mr. Marcos and all of his cohorts, in view of the fact that we no longer perceive his proclaimed presidency and the rest of his government as representing the people. They are not to me already the duly constituted authorities of this country under the Constitution…

What I am saying is that I am calling on all the members of the Armed Forces of the Philippines and the Integrated National Police (INP) to disobey all illegal orders of whoever gives them orders. And I consider any assault on the people, the firing upon unarmed and unprotected civilians as partaking of illegal orders. Also the pickup without any justification of leaders just because they have opposite political beliefs from that of President Marcos to me constitutes illegal orders as well as the entire spectrum of unjust and unfair action to which the Marcos regime was so prone to do…

They (the Philippine Constabulary, or PC) must continue to provide for the public safety. They must continue defending the people against the Communist Party and its army, the New People’s Army, because they are involved in illegal activities.

I call upon the PC, the INP and the rest of the Armed Forces of the Philippines to continue protecting the public against criminals who might take advantage of the situation at this time. And all other lawless and outlawed elements such as powerful politicians now with their private armies provided them by this group of (AFP Chief of Staff) General (Fabian) Ver. Their action has also been patently illegal.

I call upon everyone now who is imbued with the sense of justice and respect for the law to disobey the orders given to them by anyone which they construe in their mind to be illegal.

My dear people, this is a very critical time for our country. (Defense) Minister (Juan Ponce) Enrile and General Ramos have expressed their position with respect to the legitimacy of the [Marcos] government.

We appeal to the people to pray for a just and peaceful resolution of this crisis.

You spoke as a people in the last election, expressing your preference for peaceful change. I ask you to be calm and to be prepared to express again your power as a people.

Minister Enrile and those with him have appealed for food and expressions of support.

Those of you who wish to help should do so. In the meantime, continue to listen to Radio Veritas and I shall speak to you again. Let us pray together. Let us not allow a drop of blood to be shed. If we can solve this problem peacefully, that would be the best.

My dear brothers and sisters in Christ, this is Cardinal Sin speaking. I appeal to you all once again for sobriety and calm. Let us not be provoked by selfish motives and interests.

I appeal in a special way to the men in uniform, to the Armed Forces of the Philippines. We Filipinos are not the kind of people to kill brother Filipinos. Let us not be goaded to hatred and violence. Our way must be the way of peace.

The presence of military tanks and war weapons to threaten the people in search of true peace is too distressing. Do not allow yourselves to be used. I challenge you to prove to the world that we are men of integrity, men of true valor, whose loyalty is to God and to the country.

Thank you and I am praying for you. I have asked all the Contemplative Sisters to expose the Blessed Sacrament and to pray so that peace would reign in our country. Long live the Philippines. God bless you.