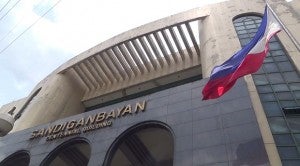 That was how Sandiganbayan justices on Friday described a whistle-blower who disclosed that she once went to the office of then Pampanga Rep. Zenaida Ducut at the House of Representatives to process the transaction the lawmaker had with alleged pork barrel scam mastermind Janet Lim-Napoles.

Taking the witness stand at Napoles’ bail hearing, Merlina Sunas said she was among the “trusted employees” of her former employer and was tasked to prepare documents and register bogus nongovernment organizations (NGOs) with the Securities and Exchange Commission.

But Sunas’ credibility was immediately put to test when the three-member Third Division started to ask about the details of her supposed involvement in the intricate scheme which Napoles’ allegedly conceived to purloin P10 billion in Priority Development Assistance Fund (PDAF) allocations of lawmakers.

Grilled by Associate Justice Alex Quiroz, the witness initially said she was personally present “only once or twice” in the meeting between the lawmakers and Napoles or her employees.

Asked who were the lawmakers she had personally met, Sunas said she could not recall their names because “there were too many of them.” She also admitted that she had never met detained Sen. Juan Ponce Enrile.

“Is the lawmaker a member of a political party? Is it Liberal Party, Nacionalista or others?” Quiroz asked.

Pressed again by Quiroz to name the lawmaker whom she claimed she had directly transacted business with, she said: “Congressman Zenaida Ducut. I think I went to her office once.”

Sunas, however, did not mention the date of her supposed meeting with Ducut, who is now the chair of the Energy Regulatory Commission.

Ducut, who served as Pampanga representative from 1995 to 2004, was identified by primary whistle-blower Benhur Luy as one of Napoles’ agents in the House. In his ledger, Luy said Ducut earned at least P40 million in commissions.

In her testimony, Sunas said she listed several persons as incorporators of the fake NGOs which Napoles supposedly set up to pocket funds intended to help poor farmers.

She claimed the individuals were not aware that she used their names, but she gave them money as their “share” of the supposed “incentives” which Napoles had promised to the incorporators of the spurious NGOs.

Quizzed by Associate Justice Samuel Martires if she told them why she handed cash to them, Sunas said the alleged incorporators, who included her cousin, niece and son, did not ask for a reason.

“No, your honor. I used to give them cash even when I was just a civilian employee of the Philippine Navy,” she said.

Presiding Justice Amparo Cabotaje-Tang, also chair of the Third Division, asked Sunas about the source of the names which appeared in the list of beneficiaries which the witness admitted were also spurious.

But Sunas said she could not remember how exactly they were able to secure the list, adding that the documents were already in their possession even before a PDAF-funded project was approved.

“I share the observation of Justice Quiroz that you have a selective memory… At some points, you have a partial amnesia,” Tang said.

Napoles, who was seated a few steps away from the witness stand, was seen smiling as if in jubilation.

“Let her be. It’s very obvious that she’s lying,” Napoles told reporters after the hearing.