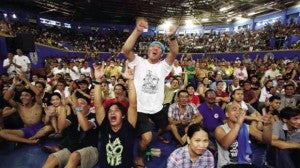 Filipinos are cheerful people in general, as shown here during one of the many winning Manny Pacquiao fights. INQUIRER file photo

MANILA, Philippines—Filipinos’ outlook for the future remains “very high,” and the number of those who expect the economy to improve in the coming years has slightly increased, the Social Weather Stations (SWS) said in its latest survey.

According to the Fourth Quarter 2014 Social Weather Report, 41 percent of respondents expect their lives to improve this year, while 6 percent expect otherwise, yielding a “very high” plus 35 net optimism score (optimists minus pessimists).

The latest personal optimism net figure was five points up from the plus 30 net rating (39 percent optimistic, 9 percent pessimistic) in the previous quarter, which the SWS had also rated as “very high.” It was also the third time such a score—the highest so far—was posted during the Aquino administration.

The survey found that 31 percent of Filipinos expect the economy “will be better,” while 15 percent claimed “it will be worse,” for a “very high” net economic optimism of plus 16, five points up from “very high” net score of plus 11 (30 percent optimists, 19 percent pessimists) in the third quarter.

Economic optimism net scores during the Aquino administration ranged from plus 30 (November 2010) to plus 2 (June 2014). The record-high plus 39 was posted in June 2010 while the record-low minus 50 in May 2005, both periods under the administration of President Gloria Macapagal-Arroyo.

The survey was conducted nationwide from Nov. 27 to Dec. 1 and the results were first published in BusinessWorld.

According to the survey, 29 percent said their quality of life in the past 12 months had improved, while 30 percent said it had worsened, for a “low” minus 1 net score.

The latest quality-of-life net figure, the highest so far registered in the Aquino administration, is seven points up from the “low” minus 8 (28 percent “gainers” against 34 percent “losers”) in the previous quarter. The record-low net score of “very low” minus 14 (22 percent gainers, 37 percent losers) was posted in June 2014.

Net economic optimism across geographical areas also went up in Mindanao (plus 29 from plus 12), Metro Manila (plus 12 from plus 5) and the rest of Luzon (plus 13 from plus 11) but decreased in the Visayas (plus 9 from plus 13).

The survey, which used face-to-face interviews with 1,800 Filipinos, had a margin of error of plus or minus 2 percentage points. Inquirer Research