Aquino not hiding from public—Palace

MANILA, Philippines – Is President Benigno Aquino III deliberately staying away from the spotlight? Malacañang on Wednesday said this isn’t the case.

Before his surprise visit at Camp Crame on Wednesday evening to see the relatives of the policemen killed in Mamasapano, Maguindanao, Aquino has been staying in Malacañang for meetings and official events. 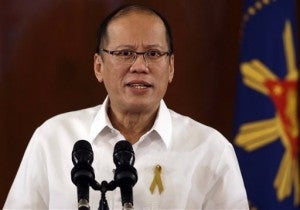 Communications Secretary Herminio Coloma Jr. said it was important to “put into context” the accusations. He said a President does not necessarily need to be at a certain place to accomplish his obligations.

He pointed out that Aquino gave a televised national message on February 6 and met with Indonesian President Joko Widodo on February 9. He also attended the meeting of the National Economic Development Authority (Neda) Board on February 16.

Coloma said it should not be an issue that the events were held inside Malacañang.

Not hiding, not afraid

“No relevance, no basis, no truth,” the Secretary said when asked if Aquino was hiding in Malacañang because of rumors of a coup plot and public outrage against the Mamasapano operation, which left 44 policemen dead.

Asked why Aquino has yet to fully divulge what he knew about the operation, Coloma said, “Pagpapasyahan po niya ‘yan sa takdang panahon (He’ll decide on it at the appropriate time).”

Aquino has been blamed for the large loss of lives. He allegedly allowed resigned PNP chief Alan Purisima, who was still suspended at the time, to direct the operation while the officer in charge of the PNP and Interior Secretary Manuel “Mar” Roxas II were kept in the dark.

While he has claimed responsibility for what happened, he has yet to discuss the details of Purisima’s involvement. Instead, he blamed relieved SAF head Getulio Napeñas for not coordinating with the military for reinforcements.

Aquino pays surprise visit to kin of SAF 44 at Crame